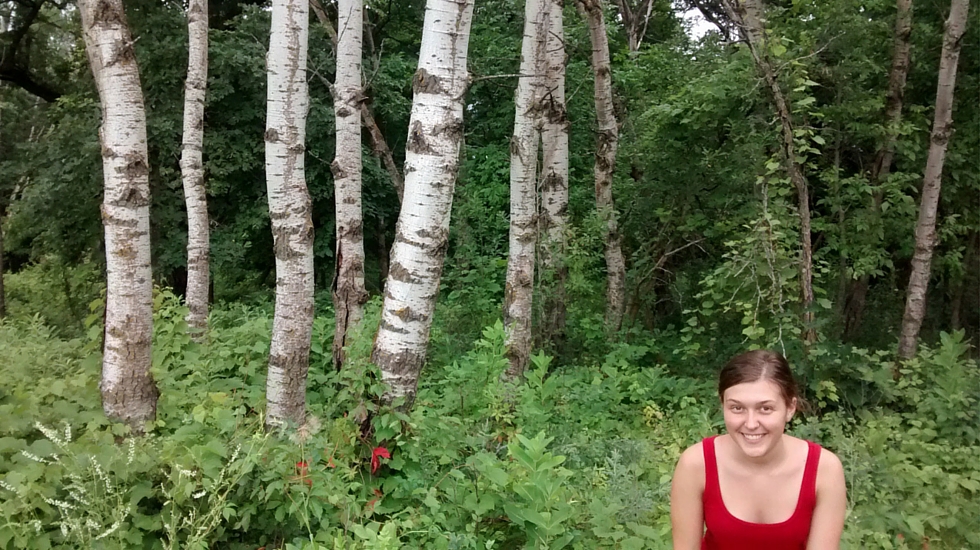 This blog is written by Freya, one of our Monthly Correspondents and an Ursids and Bucktails student.  This post talks about the birches of Minnesota – it is the last leg of her written tour of the state for you, and I hope you’ve enjoyed traveling around Minnesota through her blog posts as much as we have!

Before we leave Minnesota, there’s one more thing I have to tell you about! When you walk in the woods here, the birch trees’ bright white bark really stands out against the green woodland and forest floor. And that leads you notice something else: old birches are lying – now this is going to sound weird – deflated, all over the ground. All the wood has rotted away, but the bark is just sitting there, like it doesn’t know its tree is gone. One time I picked up one of these ‘bark tubes’ and tried to pull it open, but the bark was still so strong I couldn’t.

Now I’d heard about Native Americans building birch bark canoes and birch bark houses. I never knew much about it and I have to tell you, I was always a little incredulous: A boat. Made out of bark? You sure about that?
Actually, the Native Americans weren’t the only people relying on birch bark as a building material. Birch trees wrap all the way around the world’s northern hemisphere, showing up in most northern forests and even in mountains further south. It turns out that everywhere birches grow, native people have learned to put the bark to use. Native Americans in Minnesota, the Ojibwe, built canoes, houses, utensils, storage containers and artwork with birch bark. They made birch bark scrolls called wiigwassabak, on which they passed along their history and stories through the generations. Some of these were hidden away in caves and are an incredible 400 years old! Birch bark manuscripts from the middle ages have been discovered in Russia and birch scrolls from Afghanistan date from 2000 years ago. Even today, bark of the Himalayan birch is used in India to record sacred mantras.

So, what is it that makes birch bark so tough and useful? I’ve heard it described as a mish-mash of cardboard and leather. First, it’s layered, which makes it strong, and it’s naturally light and waterproof, making it a great building material. Second, it’s loaded with resin which makes it dry hard, so it’ll hold its shape. It can be stored after harvesting, and then made workable again later just by heating it and softening up the resin. The bark is also full of a substance called betulin which is antibacterial. That not only slows down its decomposition, but keeps food stored in birch bark containers from going bad! Finally, birch bark is also great for building because you can harvest it in big rectangles. The bark grows around the trees horizontally, not vertically like most bark, so you can just cut a vertical slit and then peel the bark off the tree with your hands. Harvesting bark can kill trees, so you should really use bark from downed ones.
Birch bark was so important to the Ojibwe, it became deeply entwined in their mythology. They saw the birch as a gift for their people. The legend goes that a boy was born whose gift from the creator was to be very helpful. He was devoted to helping anyone he could, and many, not just in his own village, were very grateful to him. After he died in battle, he was buried in a pure white buckskin and the next year, a little white tree sprouted on his grave. He had come back to continue helping his people forever.

Another great Ojibwe story about the birch goes like this: It is winter and a man, Waynaboozhoo, is sent to get fire for his people from the Thunderbird in the west. He disguises himself as a rabbit and gets himself invited into the Thunderbird’s house. He then rolls in the fire and takes off for home, with the furious thunderbird shooting lightning bolts after him. When the flaming bunny gets tired and calls for help, the birch tree answers and tells him to come hide under it. As the tree protects the little rabbit, its white bark is singed by the Thunderbird’s onslaught. And that is how the birch tree got its burns.