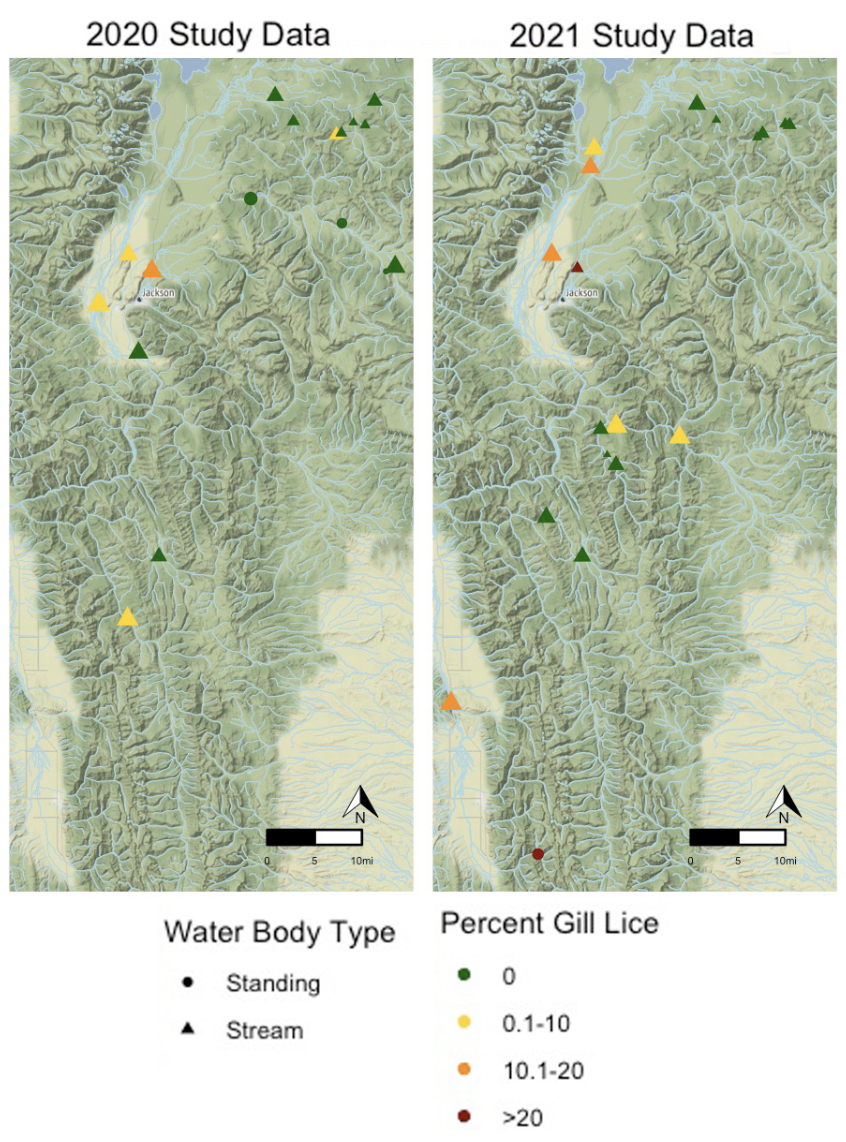 This week’s blog is a guest post written by Devin G., a Bucktails, Brookies, and Ursids alumni. Devin is a senior studying wildlife biology and management at the University of Wyoming. He leading a project that studies gill lice dynamics and works to better understand how these parasites could affect Wyoming’s fisheries.

In the fall of 2021, I began working in a fisheries lab. Now, I’m a wildlife biology major and although there was an aquatic path I could have taken, my focus was on terrestrial animals. I knew next to nothing about fish or the issues that plagued them. My day-to-day responsibilities involved dissecting fish from the Great Lakes and taking tissue samples for future analysis and it was helpful for me to learn those skills, but I wanted more. I had an interest in data analysis and visualization using programs R and ArcGIS, and I approached my supervisor asking about opportunities to put these to use. He told me of a project he was working on for the National Park Service in northwestern Wyoming, and that they could use an undergraduate student to analyze the data. That’s how I entered the world of gill lice.

Gill lice are parasitic crustaceans that feed on the blood of fish like trout and salmon. They are small and white, resembling grains of rice, and can be found in streams and lakes around the world. These parasites are a part of the ecosystem and in small numbers, gill lice do not have a profound effect on fish populations. Due to changing environmental conditions and higher densities of fish in certain areas, these parasites can be harmful to fisheries. In Colorado, fisheries have collapsed from gill lice outbreaks that have infested fish and caused gill damage as well as impaired growth. Gill lice cause similar problems in Pennsylvania too, especially on brook trout, the state fish. Because of these impacts, fisheries managers are concerned that climate change will exacerbate these effects.

As of 2016, the fishing industry in Wyoming has an economic value of nearly $200 million, a quarter of wildlife-related spending in the state. A loss of fisheries would be detrimental to the economy of fisheries and would create fewer opportunities for anglers to enjoy the outdoors. Fish are also an important part of Wyoming’s culture and a food source for many people across the state. Although gill lice do not make fish unfit for consumption, they can stunt fish growth and compromise their immune system, making them more susceptible to disease. I am currently working with collaborators from natural resource agencies including the Wyoming Game and Fish Department (WGFD) and the United States Geological Survey (USGS) as well as researchers at the University of Wyoming to better understand the dynamics of gill lice outbreaks. Using data collected in 2020 and 2021, I was able to map the distribution and intensity of gill lice in the Upper Snake River watershed. I found that gill lice presence can be variable from year to year and it appears that waterways closer to larger rivers have higher percentages of gill lice. It will be important to continue to learn about where gill lice are found in the state and how to predict future outbreaks.

WGFD also provided over ten years of historical data from a weir on the Snake River to look at the effects of different environmental conditions on gill lice outbreak timing and extent. A weir is an obstruction built in a waterway used to trap and contain fish, allowing researchers to sample and measure the fish passing through the water. At the weir on the Snake River, biologists collected salmonids (trout, char, whitefish, etc.) and inspected the fish for gill lice during the summer. I used this data, along with USGS water gauge data, to look at the effects of flow and temperature on the trends of gill lice outbreaks. The preliminary results and past research suggest that warmer, low-flow years result in ecosystems with a higher prevalence of gill lice and typically have outbreaks sooner that also last longer.

Fortunately, gill lice outbreaks have not had a significant impact on Wyoming fisheries… yet. As the climate changes, it is important to establish a baseline understanding of which environmental factors promote longer and more severe outbreaks that may threaten fish populations.

Two of the images used in this blog were sourced from the internet. They can be found here and here. The remaining image belongs to the author.