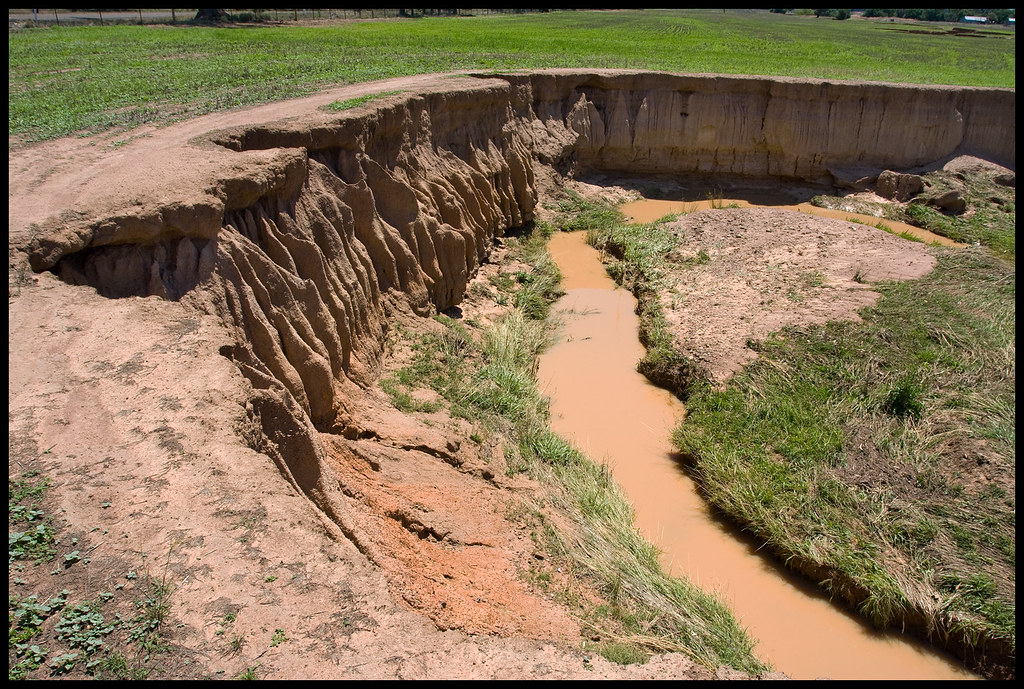 What is Dryland Salinity? And can it be prevented?

There are many different types of salinity and many ways that the presence of salt in a landscape can negatively affect an environment. Dryland salinity is one specific type that is typically caused by the movement of groundwater. When rainwater passes through the ground, it simultaneously causes groundwater to rise, which then causes salts in the soil to be dissolved into the rising groundwater. However, it is important to understand that this does not happen each time it rains. It depends on the prominence of groundwater in an area, the existing salt levels in the soils, and the amount of vegetation in the environment. That being said, some logical situations with these considerations would be the following: if there is less groundwater in an area, there is a smaller chance of that groundwater rising, and a lowered chance of increased salt content in the areas there. If there is already a considerable amount of salt in the soils of a certain area, that could be due to a previous salinity affecting the environment, salt formation occurring from the weathering of certain minerals, or even the transportation of salt through the wind or water (lakes, rivers, etc.). And lastly, if there is less vegetation in an area, it makes the area more at risk for dryland salinity, because there would be an increased amount of water not being used, both adding to the amount of groundwater there and increasing the risk of rainfall affecting salt production in the soil.

Now, another question may be, what’s the big deal with salinity? This in itself brings up the debate of the consequences of a higher salinity in an environment, and how it can affect all the species living there. The main ways that humans are affected by these salt levels are in agriculture (specifically farming in the production of crops and the health of farming soils), infrastructure (the damage and lowered life of buildings, roads, pipes, etc.), and the death of “common” plants (for example, grass in a person’s yard or in a soccer field). These are easy things that make up the daily society of humans that live in developed countries, but still, affect people regardless of where or how they live. Drinking water can also be instantly affected, the more salt in our water, the more efforts that have to be taken to treat the water so that it is safe for consumption. In terms of how natural environments are affected, it is also mainly to do with water, since that is typically how the salt is transported throughout environments. With the presence of salt in water, not only would creek and river ecosystems be affected, entire areas of the wetlands can be affected, the biodiversity of all of these would decrease because certain species just cannot live in the conditions of a higher salt-content environment. All of these issues stimulate from salinity in its broadest terms, dryland salinity could certainly be the cause of some of them. With other factors such as the climate, precipitation rates, and more, multiple types of salinity could affect the same environment, and cause lasting damage to the species living there and the human processes that usually occur there.

It is difficult to completely prevent any sort of salinity, mainly because there are many reasons why salt levels are higher in one environment rather than another. But, it is important to know that water is the typical source for any dryland salinity occurring. If the water is monitored properly, whether that is in the integration of irrigation or other water systems, or pumping groundwater deeper into the ground, there are plenty of ways to combat the issue of salinity in an area. Along with keeping an eye on the water in an environment, maintaining vegetation cover and the health of the soil is a decent way of ensuring that waterlogging will not occur, and thus, avoiding dryland salinity.

The photos the author used were sourced from the internet. They can be found here and here.