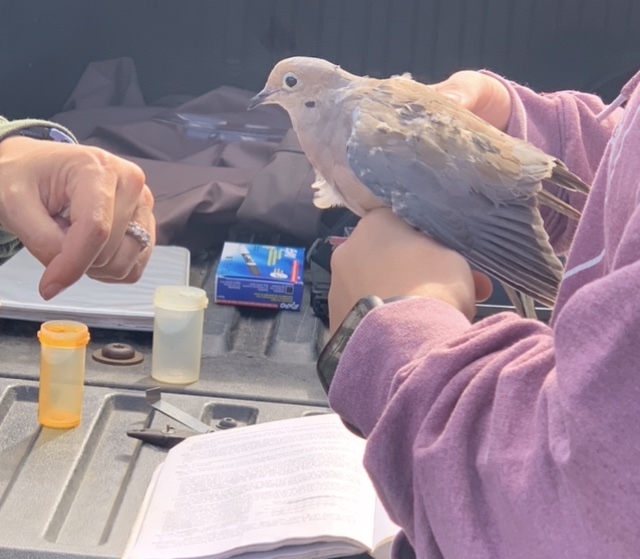 This week’s blog was written by Sierra R., a Bass alumni. This summer Sierra returned to the Wildlife Leadership Academy as an Assistant Team Leader to continue to learn about the environment and the many career fields available. Sierra’s hobbies include hiking, nature journaling, Girl Scouts, and theater.

During my visit to the Penn State DuBois campus with the Wildlife Leadership Academy we were able to participate in the hands-on research activity of bird banding. For those who have never been, bird banding is a tagging method used to collect data on birds. The information collected goes to the Bird Banding Laboratory of the National Geologic Survey database. It can then be used in a variety of research such as habitat studies and migration analysis. At the DuBois campus, they run a voluntary bird banding station open to all students.

The first step to bird banding is catching the birds. At the campus, they target mainly songbirds. The nets they use are wide-field nets with fine-medium netting. The nets are placed around flight level being just over a few small trees and tall brush within the habitat. How it works is the birds fly into the loose net vertically then drop into the baggy mesh at the bottom. The bird bander can then pick the bird directly out of the net. The nets are set up around 7:30 am and checked every hour until they are taken down around noon. The banding started early with the first net check being at 8:30 am. It was a little cold, but songbirds are most active in the early hours of the day. Most of the birds were easily taken out of the nets with the exception of one goldfinch that had gotten a little more tangled than the others. With a little help from the experienced field technician, the campus students were able to pluck the bird right out. After being taken out of the nets the birds were then placed into their own private canvas sack. The canvas sacks are very dark and help keep the bird calm and safe.

With a large number of birds, we made our way to the banding station. First, the bird is identified, identifying birds is certainly a cultivated skill. A large bird identification book along with the bird banding manual was on standby for the campus students. Once the bird species is identified a band size is then suggested. The bands are lightweight aluminum inscribed with a serial number. Every bird is given a unique set of numbers, the serial number on the bird’s band is just like our social security numbers. These bands are only dispensed to permit holders. The serial number is noted and then on the datasheet, they marked if the bird was a hatch-year or past second year. After a bird’s second year it is impossible to mark down exactly how old a bird may be. There are a variety of ways they used to identify the approximate age of the birds. The most common way was by identifying if the bird still had its juvenile feathers. Depending on the species though you can use mouth color, eye color, or even formation of the skull to estimate if the bird is beyond its second year. The birds’ sex is also marked although not always as the sex of some birds can only be identified during mating season when the females have a brood patch. Finally, they collect the bird’s weight. Getting the weight of the bird was my favorite part, partly because the method used is a little silly looking. The birds are put upside down into pill bottles and then weighed on a scale. Although seemingly odd, the upside down position and tight fit helps ensure the bird is calm and safe. After a split second in the scale, they are done with their data collection.

After all the data was collected each of the Wildlife Leadership Academy students were able to hold and release a bird. I myself got to release a very stunning red wing blackbird. Bird banding at Penn State Dubois was an amazing opportunity to get a feel for what real-life field research is like. I am very thankful I was able to participate.