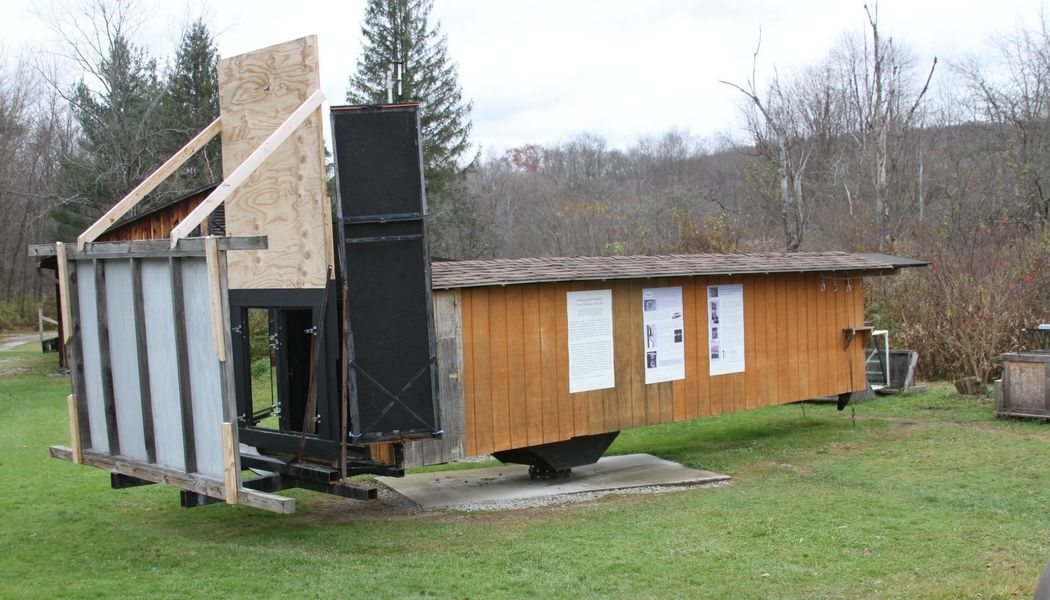 This week’s post comes to us from Zara, a monthly blog correspondent and Drummers alumni.  She writes about bird friendly glass that allows birds to prevent window collisions. This new research in window glass has the potential to greatly reduce bird/glass impacts by making the glass more visible to bird in flight.

Did you know that at least 100 million birds die each year from collisions with glass that they are unable to see? It is sad, but true. Because of this, scientists at Powdermill Nature Reserve have been working with glass companies to design a type of patterned glass that birds can see, thus resulting in less bird-glass collisions. This in and of itself would be a relatively easy feat. The real challenge, however, is to develop a patterned glass that is visible to birds and simultaneously unobtrusive to humans. The research is fascinating, and I have been privileged to take part in it.

The glass testing takes place at Powdermill Nature Reserve’s bird banding lab in a long, wooden, shed-like structure called ‘The Tunnel’. Two panes of glass are placed at one end of ‘The Tunnel’, which is completely open behind the glass. The test pane, which is patterned, and the control pane, which is non-patterned are placed side by side, so they can be tested against each other. A technician takes one bird at a time to a hole in the tunnel on the side opposite of the glass. The birds literally see the light at the end of the tunnel and fly towards it thinking it is their way out. To avoid actual collision with the glass panes in the tunnel, a mist net is positioned in front of the glass to stop the birds before they hit it. Every flight is videotaped for later reference. Each test, or patterned, pane of glass is tested with twelve different birds on the right side of ‘The Tunnel’, and again with twelve more birds on the left side. In order to achieve significant data on a particular pane of glass, there must be 80 usable flights accompanying it. Not all of the flights in the tunnel are usable, because some of the birds refuse to cooperate. Ruby crowned kinglets have a habit of flying partially down ‘The Tunnel’, only to stop and hang from the ceiling where they remain until a technician retrieves them. I have crawled into the tunnel to “pluck” kinglets from the ceiling my fair share of times. Sparrows, on the other hand, decide it isn’t worth their time flying down the tunnel, so they hop instead. Any such occurrence is deemed a non-usable flight, and it usually takes about 120 actual flights to achieve 80 usable ones. Glass companies pay Powdermill to test their glass. And the different patterns on the test panes are quite varied and interesting. They range from white herons, to hardly distinguishable UV lines. Some of the glass companies have tried multiple layers of glass to see if that is more visible to birds. Thus far, there isn’t one type of pattern that works better than the rest. It’s not as if UV patterns work, but painted patterns don’t. Also, this research is relatively new, so there haven’t been a multitude of conclusive results yet. But the results to date are very promising. Hopefully soon there will be glass available to everyone that will prevent millions of bird deaths caused by window collisions each year.