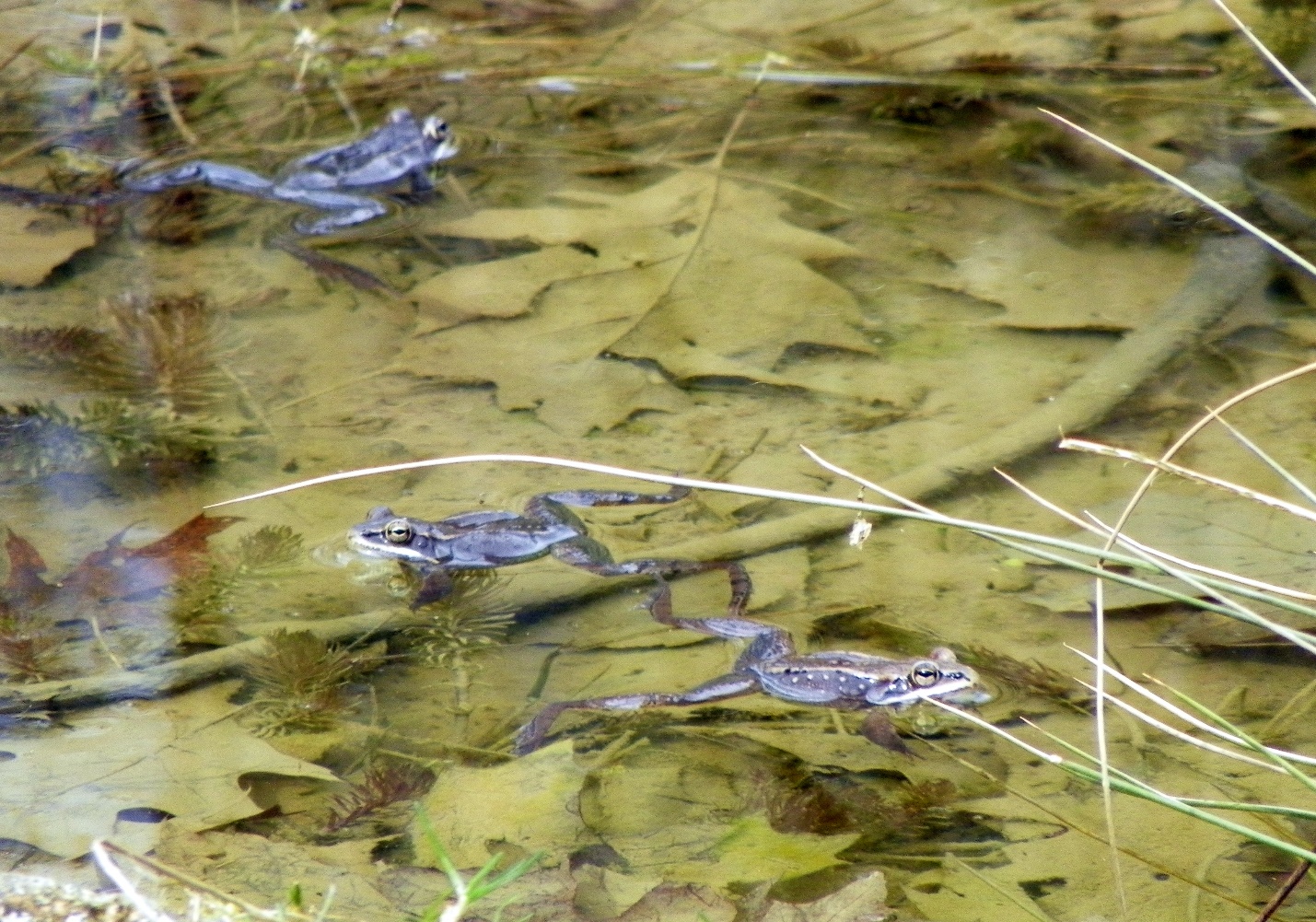 This week’s blog post is written by Peter, a monthly blog correspondent and Bucktails and Ursids alumni.  He shares with us lots of great info about a diminutive little woodland creature – who has a way of “keeping its cool” throughout the harrowing winter months!

When the snow melts and the ice thaws on the vernal pools and small ponds of the Appalachians, a unique frog begins an almost unbelievable process. Lithobates Sylvaticus (also known as Rana Sylvatica), the wood frog, starts to thaw out. And yes, I mean thaw out, just like a chunk of ice.

Every fall, the wood frog migrates from its summer habitat to wooded uplands to winter. Most other frogs winter in deep pools or ponds where the bottom never freezes. The wood frog, however, moves away from water, and chooses instead to winter under the leaf litter on the forest floor. But how does the wood frog not freeze when the temperatures drop well below freezing? Actually, they do freeze—solid.

When a wood frog first touches an ice crystal in late fall, it triggers a series of changes that prepare the wood frog for winter. The wood frog stores large amounts of urea in its blood, which acts as anti-freeze. The wood frog’s abdominal cavity fills with water, which soon turns to ice and encases the internal organs. The frog’s liver produces substantial amounts of glucose, which fills all the frog’s cells with a thick syrupy solution. This glucose solution does not freeze, which prevents the tissue damage that occurs when other creatures’ flesh freezes (frostbite). Also, when other creatures get frostbite, the freezing process pulls water out of the cells, which dehydrates them and causes the cell walls to collapse. The glucose inside of the frog’s cells binds the water molecules and prevents them from being pulled out of the cells, which prevents cell collapse.

At some point during the freezing process, the frog ceases to breathe. The heartbeat stops, and the brain quits functioning. If I was talking about any other creature, you would think I would be talking about a dead animal. With no breathing, heartbeat, or brain function, how does the wood frog survive? Scientists have yet to discover some of the remarkable secrets of a wood frog’s survival.

Nevertheless, every spring, Lithobates Sylvaticus awakes. After a winter of frozen inactivity, the heart starts to beat once again. Next, the brain awakes, followed by muscles movement. Researches have not figured out the miracle of the wood frog’s revival. They have yet to discover what triggers the wood frog’s heart to begin beating again after a winter of no pulse. However, within a day or so after of the start of the thawing process, the wood frog is on its way to a pool or pond to breed.

Wood frogs live in many places across North America, ranging from the Southern Appalachians to northeastern Canada to Northern Alaska. There are also several separate populations in various areas, including eastern North Carolina and Wyoming. Wood frogs are among the first frogs to emerge in the spring, largely because they hibernate on the forest floor which warms up faster than the bottom of deep pools, where other frogs hibernate.