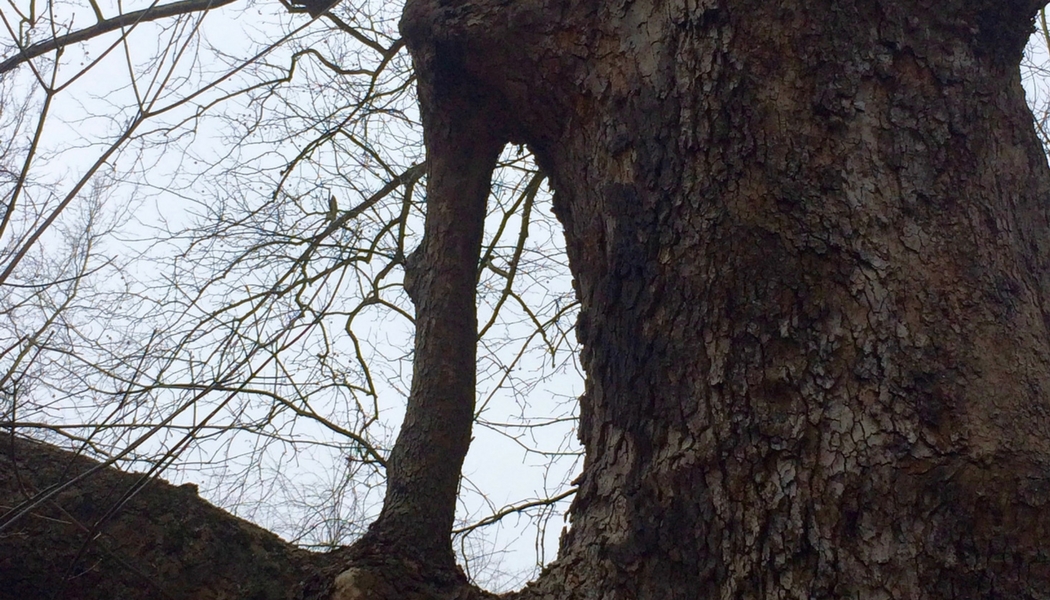 This week’s post is written by Monthly Blog Correspondent, Julia B, a Bucktails and Bass alumni. She highlights a natural phenomenon rarely seen, inosculation. Julia elaborates on how trees can become inosculated and how it can be associated with spiritual meaning.

Have you ever noticed a tree with a branch that connected back to another part of the tree?  It seems to defy logic!  How could a branch grow in a circular shape?  This natural phenomenon is actually possible, though somewhat rare, through inosculation which allows trees to self-graft and grow together.

Tree branches have layers of different kinds of cells.  The outermost is the thin outer bark, which covers a similarly thin layer of inner bark cells known as the phloem.  Inside the phloem layer lie the cambium cells that make the branch grow.  Further inside lie the sapwood and heartwood, responsible respectively for moving water and supporting the tree.  The most important layer of cells for inosculation is the growing cambium cell layer.  If two parts of a tree grow to touch each other very slightly, movement caused by the wind causes the thin bark layers to wear away.  It doesn’t matter if the two touching parts are a branch to a branch, a branch to a trunk, or even a trunk to a another trunk of the same or a similar tree species.  When the cambium cells from the two tree sections make contact, the cambium growing layers of the two tree segments fuse together.  Eventually, the tree heals at the junction and forms bark over the fused cambium cells creating a normal-looking branch junction.

If two individual trees conjoin, they are called “marriage trees” or “husband and wife” trees.  Additionally, the thinner the tree species’ bark, the more common inosculation is among the species.  Therefore, species that inosculate relatively frequently include apple, pear, olive, and beech, in part due to their thin bark.  However, their tendency to grow very close together raises the likelihood that these species of trees inosculate with other separate tree segments.  This is because these species’ individual trees come into contact with each other much more frequently than other species that struggle surviving in high population density.

Natural inosculation is uncommon enough that some old religions associated spiritual meaning with these sylvan occurrences.  Despite the simplicity of the science that causes this phenomena, inosculated trees look so unusual that it’s unsurprising that they’ve historically held symbolic significance.