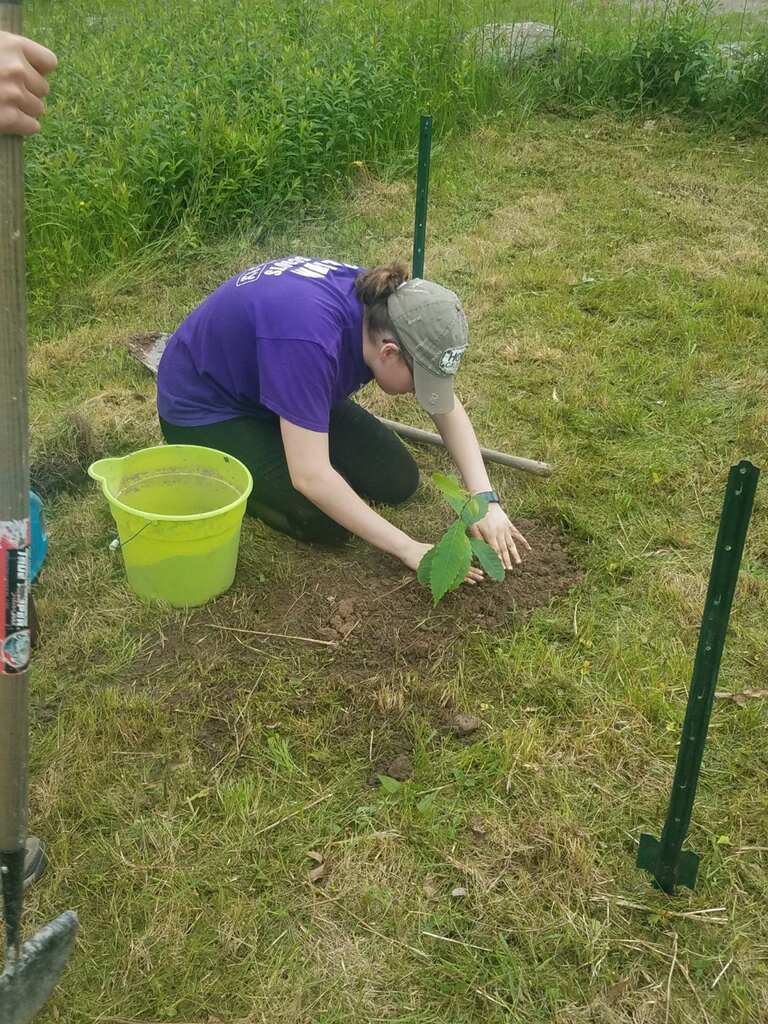 This week’s blog was written by Sinclaire O., a Bucktails alumni. She shares what she has learned while helping to restore the American Chestnut population.

This spring and summer I had the opportunity to participate in a nationwide movement led by the American Chestnut Foundation (TACF) that is taking place right here at Lacawac Sanctuary. The goal of TACF is to restore the American chestnut (Castanea dentata) tree that once dominated and ranged greatly over the Northeastern forests. The tree species was stricken by a fungal blight, Cryphonectria parasitica, and almost vanished completely from the forests. The fungal pathogen was imported accidentally from Asia to the U.S. Once introduced, with no predators in the U.S., the pathogen was able to spread rapidly throughout the eastern forests. Since it is a wound pathogen it enters the tree through bark damage. As it spreads through the fungus deprives the tree of nutrients resulting in tree death. The species has managed to survive because the blight does not kill the root system, allowing sprouts to grow from the stumps. Eventually, the new trees surrender to the blight again and will die.

TACF is working on a couple of different approaches to make blight-resistant trees. The first is to cross-breed the American chestnut with the Chinese chestnut (Castanea mollissima), a species that is resistant to the blight. The hope is to develop a blight-resistant hybrid after several generations. This method was developed by Dr. Charles Burnham, a plant geneticist from the University of Minnesota and co-founder of TACF.

The second method is to genetically modify the American chestnut. With the help of genetic engineering, TACF wants to insert a gene that makes the trees blight resistant. The gene that has been found to work codes for a detoxifying enzyme, oxalate oxidase (OxO), that breaks down the oxalic acid that is a primary component in killing the trees. Inserting this gene into the chestnut tree’s genetic material provides trees with blight resistance which can be passed down through generations. This gene is found in many food crops, especially wheat. The modified chestnut trees will still carry 100% of its original genes with the addition of the OxO-coding gene. The research is being conducted by TACF in conjunction with the State University of New York’s College of Environmental Science & Forestry. The genetic engineering is in the process of obtaining government approval.

I am partnering with Tom Huff of the New York chapter of the TACF and Lacawac Sanctuary to assist with the effort to repopulate Northeastern forests with chestnut trees as my senior project at Western Wayne High School. In the early summer of 2019, I helped plant eight pure Castanea dentata seedlings in the meadow next to the Lacawac Visitor’s Center. These tree seedlings were grown from seeds of surviving chestnuts and they were planted so they can mature to a reproductive stage. The trees are planted in a square pattern with space in the middle for several more trees. When approved, genetically modified trees will be planted in the middle to be pollinated by the “mother” trees I planted this year. This will increase the genetic diversity of the nuts produced by the modified trees as well as subsequent generations of blight resistant trees. Planting seedlings this year kick-started this process that will take years to complete. Until then, my job for my Senior Project is to mow the area for access, water the trees when needed, and make sure the enclosures that protect the trees from deer and other herbivores remain intact.

There were wild chestnut trees on Lacawac’s property as late as 1975. There may still be chestnut trees at Lacawac today because the chestnut’s root system can survive the parasite’s attack. New trees may have grown back from the surviving root sprouts. Tom Huff is offering a $125 award prize for the person who finds the largest wild chestnut tree at Lacawac. There is more information located in the Visitor’s Center lobby. The trees planted have been doing well throughout the summer and the crazy weather it brought. Come out and show your local chestnut trees some support while enjoying what Lacawac has to offer. Now, all we can do now is wait and watch them grow.

← Mourning Doves
Chronic Wasting Disease: A Concern to Every Pennsylvanian →