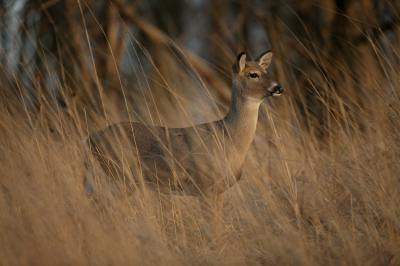 Chronic Wasting Disease: A Concern to Every Pennsylvanian

This week’s blog was written by Emma O., a Drummers alumni. She shares the concerning facts about Chronic Wasting Disease.

Any Pennsylvanian who is passionate about conservation has most likely heard of a serious new disease roaming the Commonwealth’s land–chronic wasting disease. Chronic wasting disease ravages members of the deer (cervid) family and is always deadly. The effects of this issue are wide-reaching, with dramatic decreases in deer population affecting their ecosystems, from which we glean many natural resources.

It is widely believed that chronic wasting disease is caused by an infectious agent called prions. Smaller than most viral particles, prions are abnormal cellular proteins that are typically found in lymphoid tissue and the central nervous system. Prions are an issue because they trigger changes of normal cellular tissue to abnormal cellular tissue, causing a cascade of negative effects in the host organism. This agent may passed laterally (from animal to animal) and sometimes maternally (from mother to offspring) through urine, feces, and saliva. Transmission of this infectious agent may also be indirect or direct, meaning physical contact from organism to organism or no physical contact from organism to organism, respectively. Contaminated pastures have been found to be a source of chronic wasting disease, as well as the movement of live animals to new areas; it is likely that the disease is passed both from captivated animals to wild animals and from wild animals to captivated animals.

The neural degeneration that this disease causes results in a variety of negative effects, such as emaciation, behavioral changes, and, again, changes in the brain, tonsils, or lymph nodes. These symptoms, because of the disease’s long incubation period, typically appear in the organism’s late adult stage. One interesting aspect of chronic wasting disease is that infected animals are usually indistinguishable from healthy animals–again, because of the prion’s long incubation period. Always fatal, chronic wasting disease causes infected organisms to eat a reduced amount while having excessive urination; this process leads to extreme weight loss. Behavioral changes that occur in the infected organism include listlessness, decreased interaction with other organisms, repetitive walking in patterns, and a blank facial expression.

To prevent the spread of chronic wasting disease, one must not handle, shoot, or consume an organism that is acting abnormally. It is important that, when dressing a deer, to try not to touch the eyes, lymph nodes, spleen, spinal cord, or brain.

The Pennsylvania Game Commission is currently drafting a CWD Response Plan, upon which the public may comment on through February of 2020. When a potentially infected organism is detected, a CWD Control Unit will be established, working with hunters and landowners to create and submit samples. In areas where chronic wasting disease is confirmed, the goal is to keep its prevalence below 5 percent; this goal would be accomplished by increasing hunting and increasing education to the public.

Chronic wasting disease should be of serious concern to every Pennsylvanian, regardless of their hunting habits. The reality of the issue is that a loss of members of the deer family has an impact on their ecosystem, and thus, on us!

The images found in this blog were sourced from the Creative Commons on the internet. They can be found here, here, and also here.