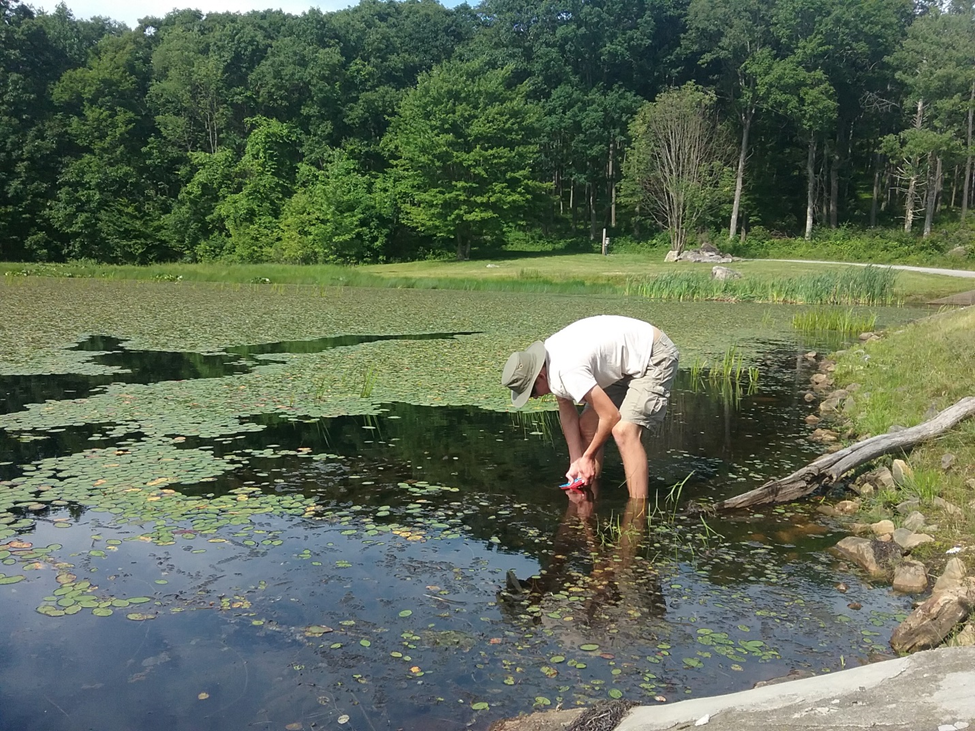 This guest post is written by Peter L., an Ursids, Drummers, and Gobblers alumni, who is writing a special 4-part series, detailing his journey towards applying for the William T. Hornaday Silver Medal Award, through the Boy Scouts.  As part of earning this award, scouts must “plan, lead, and carry out four significant projects in natural resource conservation or environmental improvements,” and Peter has written a blog post for each of his projects.

This spring and summer, I have been on a quest. For the Boy Scouts of America’s William T. Hornaday Silver Medal for Conservation. The William T. Hornaday Awards program was implemented by the Boy Scouts in 1937 and was named in honor of Dr. William T. Hornaday, a wildlife and natural resources champion in the late 1800’s and early 1900’s. There are 3 levels of recognition that Boy Scouts can receive through this program for conservation service work: the William T. Hornaday Badge, Bronze Medal, and Silver Medal. Each higher level award requires more dedication and effort. The Silver Medal is the highest youth conservation award that Boy Scouts of America bestows, and it is also one of the rarest awards in Scouting, with an average of 2-3 youth per year across the nation receiving the Silver Medal. This blog post is Part 1 of a Four-Part Series that will detail the work done in each of the 4 extensive projects that I completed this year during my pursuit of the Silver Medal. The focus of this article is fourth and final project that I completed this summer: “Saving Cranberry Glade Lake: A Research Assessment”.The goal of my project was to perform research on Cranberry Glade Lake, a 72-acre man-made lake located near me in Somerset County. The lake is choked by excessive aquatic vegetation, which I initially believed to be all invasive species. The aquatic vegetation issue has become so severe over the past several years that the lake is nearly unusable. Cranberry Glade Lake used to be a popular fishing and recreation lake but is now rarely visited. The lake also used to host a nesting pair of Ospreys but is not currently. This is likely due to the fact that Ospreys cannot effectively fish through dense vegetation. I wanted to do something to restore the lake and remove the invasive species.

My initial plan of action involved stocking Triploid Grass Carp in the lake. Triploid Grass Carp are a sterile variety of Grass Carp, an herbivorous fish species native to Asia. Triploid Grass Carp can be used effectively in waterways with excess aquatic vegetation to eat the vegetation, thus reducing the plant coverage and improving the body of water. I thought this sounded perfect for Cranberry Glade Lake! Until I started to do more research…
And believe me, I did a lot of research…all summer long! I found that Triploid Grass Carp can have negative impacts on the ecosystem, especially when placed in the wrong environment. They are selective with the plants they consume and require certain water condition to thrive. After learning this, another research idea came to mind. Why not create several fish enclosures in the lake and stock them with Triploid Grass Carp to ascertain whether the Carp would actually thrive and eat the weeds? Designing an experiment like this would save on expense and would prove the possible effectiveness of Triploid Grass Carp as a control method for Cranberry Glade Lake. This idea sounded great! Until I did more research…

I consulted several natural resource professionals who I knew were familiar with the subject. Both of them are college professors at California University of Pennsylvania, Dr. Robert Whyte and Dr. David Argent. As I discussed my project ideas with them, they brought several important things to my attention. First of all, escape-proof fish enclosures are impossible to make. This means that the Triploid Grass Carp that I stock could escape without me being aware, and this would reduce the accuracy and consistency of my experiment. Secondly, because the Grass Carp would escape, I would have to install a spillway containment device at the breast of the dam to prevent the Triploid Grass Carp from escaping Cranberry Glade Lake and heading downstream to other waterways. Third, I could perform other research that does not involve the risks associated with stocking Triploid Grass Carp and still accomplish the same determination and gather additional valuable information on Cranberry Glade Lake itself.
I began working closely with Dr. Argent to develop a plan that was useful and environmentally sound. We developed a plan to include the following: recording a summer-long profile of the water temperature, pH, turbidity, phosphate, nitrate, nitrite, total dissolved solids, and electro conductivity levels, developing of a contour map indicating the depth of the Lake, developing a vegetation map to include species presence and distribution. I also planned to conduct research on the feeding and water condition preferences of Triploid Grass Carp. All of this data and research would be assessed at the end of the summer to determine if Triploid Grass Carp would be a suitable and sustainable management solution for Cranberry Glade Lake. This research would also provide a comprehensive baseline of the lake that could be consulted by future researchers and lake managers.

This was the project plan that we settled on and that I carried out, with the help of the volunteers. Even though I am still in high school, I was able to receive college credit through California University of Pennsylvania for the research that I conducted through a Biological Research Investigation Class. As part of the Biological Research Investigation, I compiled the data collected from the research into a formal research poster. I will present this poster to other college students at several poster events at the University. Dr. Argent helped me to edit the poster and ensure that my data was accurately represented.

In total, this project involved 15 volunteers and 561 total hours, 236 hours of which were my own. The research poster and a research report were given to Dr. Argent. He forwarded this information to the Pennsylvania Fish & Boat Commission, so they can use my research to guide their management decisions.

Be sure to stay tuned for the next article in the series, “William T. Hornaday Silver Medal for Conservation Quest: Part 2. Researching Raptors on Chestnut Ridge.”