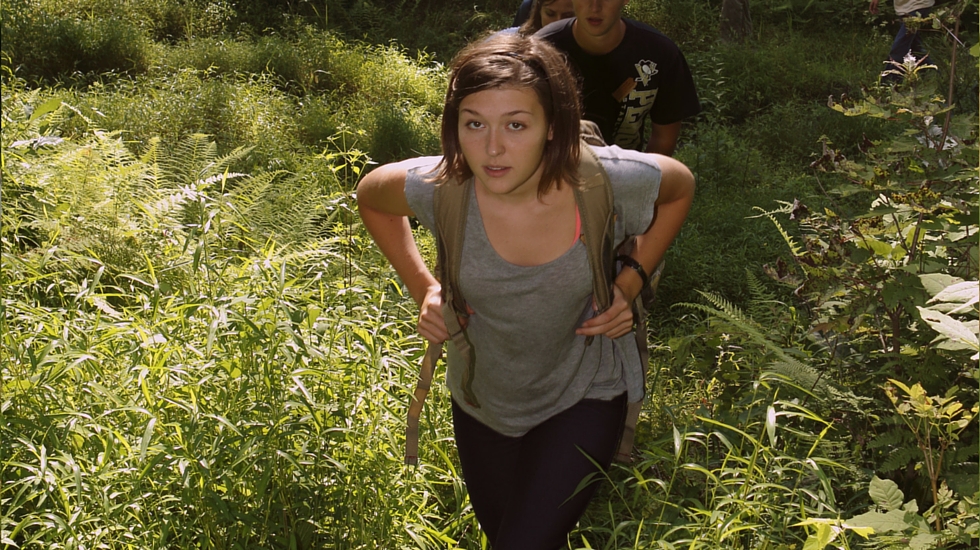 Searching for the Black Bears of Itasca

This blog post is written by one of our Monthly Youth Blog Correspondents, Freya, an alumni of our Bucktails and Ursids field schools.  She writes about her search for the black bear in Itasca State Park, Minnesota.  She also included some of her original artwork – very impressive!

Unlike some of you lucky folks, I do not live in an area where there are bears. So when we were in Minnesota this summer, camping in Itasca State Park, I was hoping very much to get to see one. Black bear sightings in Itasca aren’t that rare; the population is stable and there are about 2-3 bears per square mile.

It wasn’t always like this. Black bears in Minnesota have a recovery story like much other wildlife in the U.S. But hey, just ‘cause it’s one of many recovery stories doesn’t mean it’s not interesting. In Minnesota, black bears actually used to be classified as ‘varmints’ (yep, varmint is an official classification)! What’s more, there was a bounty for killing one: $50 paid by the county. If anyone one spotted a bear, they could just call their friends and try to surround and kill it. If the hunt was successful, they’d use the bounty money to buy beer and have a big party that night!

Well, you can imagine that paying for everyone’s parties might take a toll on Minnesota’s bears. It did. In 1959 there were only two sightings in the park. In 1971, no doubt to the dismay of many happy party-goers, the bear became a ‘big game species’. Fully protected under game laws, the bear population started to rise. These days, the Minnesota population is hanging around 10-15,000, which is actually lower than the target population of 15-20,000. Bears have been hit by some tough winters and some over-hunting. Harsh winters can actually lead to over-hunting: since there’s less food around, hunter’s bait is much more attractive and so a higher proportion of the population gets killed. Even with regulations, it’s impossible to have complete control of a population.

In Minnesota, I found out about a technique for tagging bears that I hadn’t heard of before. Managers put out baits, like peanut butter and marshmallows or bacon, with tetracycline pills in them, just the way you’d give your dog medications in a blob of peanut butter. Tetracycline is an antibiotic that stains the bear’s teeth. Brown teeth mark the bear just like an ear-tag. The bait is mounted on tree trunks in closed boxes that only a bear is strong enough to open. Hunters are always required to turn in teeth from any bear they kill. With the tetracycline staining, the teeth give managers both the bear’s age and a population estimate, based on the proportion of stained teeth they collect.
The forest in Minnesota, being further north, is more representative of the black bear’s range than a Pennsylvania forest. The winters are long and bitterly cold, while the summers are a mad scramble for all the wildlife to grow, reproduce and store enough energy to make it through the next deep-freeze. We were there in mid-July, one of the busiest months of the year for wildlife. We took hikes every day, hoping to see a bear.

So, did we get to see a bear? No, but they saw us. After dark on our first night, my younger cousin and I walked to a playground close to our campsite. We heard the rustling of something pretty big a little way into the woods and then a weird, hollow popping noise. The only thing I could imagine making a noise like that was some kind of exotic bird, which didn’t match the scuffling that went with it. Then, a rustle from the trees of the other side of the clearing and a long low moan startled me. I stared into the grainy black shadows. It had sounded like a big, worried dog with a head cold. “Dog?” my cousin asked. Nope, I thought. “Yeah.” I said, “we should go.”

More than a week later when we’d gotten home from camping, I was trying to figure out what we’d heard. There are foxes, gray wolves, bobcats, mountain lions, badgers, raccoons, weasels, skunks and black bears in Itasca. Some of these we could rule out easily. I listened to bear noises online, and found this: http://www.bear.org/website/bear-pages/black-bear/communication/29-vocalizations-a-body-language.html Listen to the sound-file beneath ‘Apprehensive expressions’.

It’s called jaw-popping and they make the sound when they’re distressed, by chomping their teeth together. This is quite distinctive, and definitely what we heard. So, the whole week in Isaca while I was hoping for a bear encounter, I’d already been within 25 feet of two bears the very first night! Back home in Pennsylvania, I’ve read that bear sightings in my area are on the rise, so I’ll have to keep my eyes open here too.