This week, Eli, a Brookies and Ursids alumni, shares with us more of his “Naturalist’s Notes.”  He writes about our national bird, and their recovery after a significant population crash.  His original photos of this majestic bird are truly stunning!

As our national bird, the Bald Eagle appears on everything from our currency, to state buildings, and innumerable sports teams. During the 20th century, their population crashed due to the use of a pesticide known as DDT, but thanks to conservation efforts they are now abundant across North America.

The Bald Eagle, strong, imposing, and wild, just like America. Those traits combined with the fact that Bald Eagles were plentiful across the United States in the year of 1782 made them the ideal candidate for the national symbol and bird. Ever since then, the Bald Eagle has been symbolizing all facets of the United States government

With a wingspan that can exceed 7 feet and weighing 6 to 14 pounds, Bald Eagles can be counted among the largest birds of prey. Bald Eagles can be easily distinguished in flight because they keep their wings flat unlike other soaring birds. Fish makes up most of the Bald Eagles’ diet, but on occasion they will eat ducks and geese. Bald Eagles will also steal food from other birds, especially Osprey. Such behavior led Ben Franklin to declare, when opposing making them the national symbol in favor of the Turkey, that  “[T]he Bald Eagle has bad moral character and does not make an honest living”. 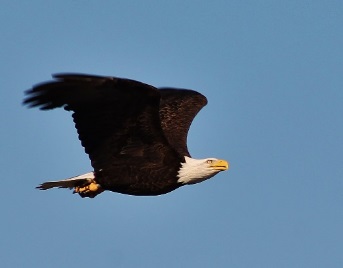 Bald Eagles were common in North America at the time of European colonization and were considered sacred by the Native Americans. They remained common up through the 18th and early 19th centuries, but due to habitat destruction and direct persecution their population was considerably reduced by the start of the 20th century. The boom in chemical pesticide use, particular DDT, during the mid- 20th century lead to a rapid crash in the Bald Eagle population. DDT in the fish that the eagles were eating was making their egg shells thinner causing them to break during incubation. DDT was banned in the 1970s and the Bald Eagle was placed under the protection of the new Endangered Species Act. The population recovered quickly and today the Bald Eagle is abundant along rivers and lakes across North America.