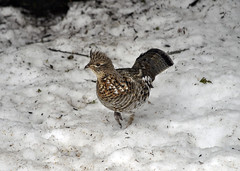 This week’s blog was written by Emma O., a Drummers alumni. She writes about how the West Nile Virus is effecting the ruffed grouse population.

Though a small, seemingly insignificant gamebird, the ruffed grouse’s impact is immeasurable. Along with being central to outdoor recreational culture in many states, this avian species is a boon to various ecosystems and, surprisingly, to the average person. However, the ruffed grouse is being targeted by an unusual new killer–West Nile Virus.

Introduced to North America in 1999, West Nile Virus is a single-stranded RNA infection that is astonishing in its virulence. The virus is transmitted by mosquitoes, causing symptoms such as headaches, body aches, fevers, swollen lymph glands, and even swelling of the brain and the spinal cord. Though symptoms often do not present themselves in those infected, the serious possibility of encephalitis makes this infection potentially lethal. Importantly, there is no cure for this virus; the goal of professionals is to contain the spread of West Nile Virus and to alleviate symptoms in the infected. Surprisingly, the virus is maintained in nature through a cyclical transmission between mosquitoes and birds, with birds acting as a vector secondary to mosquitoes. Though the mosquito Culex pipiens is the main vector for human infection, the mosquito Culex restuans is the main vector for bird infection; thus, the latter species is the one that researches are concerned about in regards to potential harmful effects on bird populations. When mosquitoes feed on infected birds, the virus enters their bloodstream, eventually reaching their salivary glands. When the mosquito feeds subsequently, the virus is injected into the subject (i.e. birds), where the virus may multiply. As such, West Nile Virus may be transmitted through direct contact between organisms, their tissues, or blood; moreover, the virus stays in the reproductive cycle of the mosquito, causing it to be passed from adult to egg. The largest outbreaks of West Nile Virus have occurred in the USA, Russia, Romania, Israel, and Greece. Unsurprisingly, each of these nations is located along major bird migratory routes. This virus has been documented in over 250 avian species. Just like humans, birds do not always present visible symptoms when infected; the most common visible symptoms in birds are unnatural thinness, abnormal behavior, or erratic flight. Typically, birds that are vulnerable to infection pass away within three weeks, a very rapid progression of illness.

One avian species that is particularly susceptible to West Nile Virus is the ruffed grouse; since the disease’s introduction to North America, this grouse species has experienced significant population decline. Based on the Ruffed Grouse Society’s recent research initiative with Colorado State University, ruffed grouse are very vulnerable to the virus and suffer high mortality rates. In Pennsylvania, for example, peaks in West Nile Virus infection occurred from 2001-2004 and 2012-2014, with each spike dramatically reducing grouse populations. Moreover, just one year after West Nile Virus was introduced to North America, a New York based environmental agency received an alarming 150 ruffed grouse carcasses from across the state–collected by ordinary citizens, no less. A great percentage of those carcasses were found to be carrying West Nile Virus.

The photos used in this blog were sourced from the internet! They can be found here, here, here, and here.