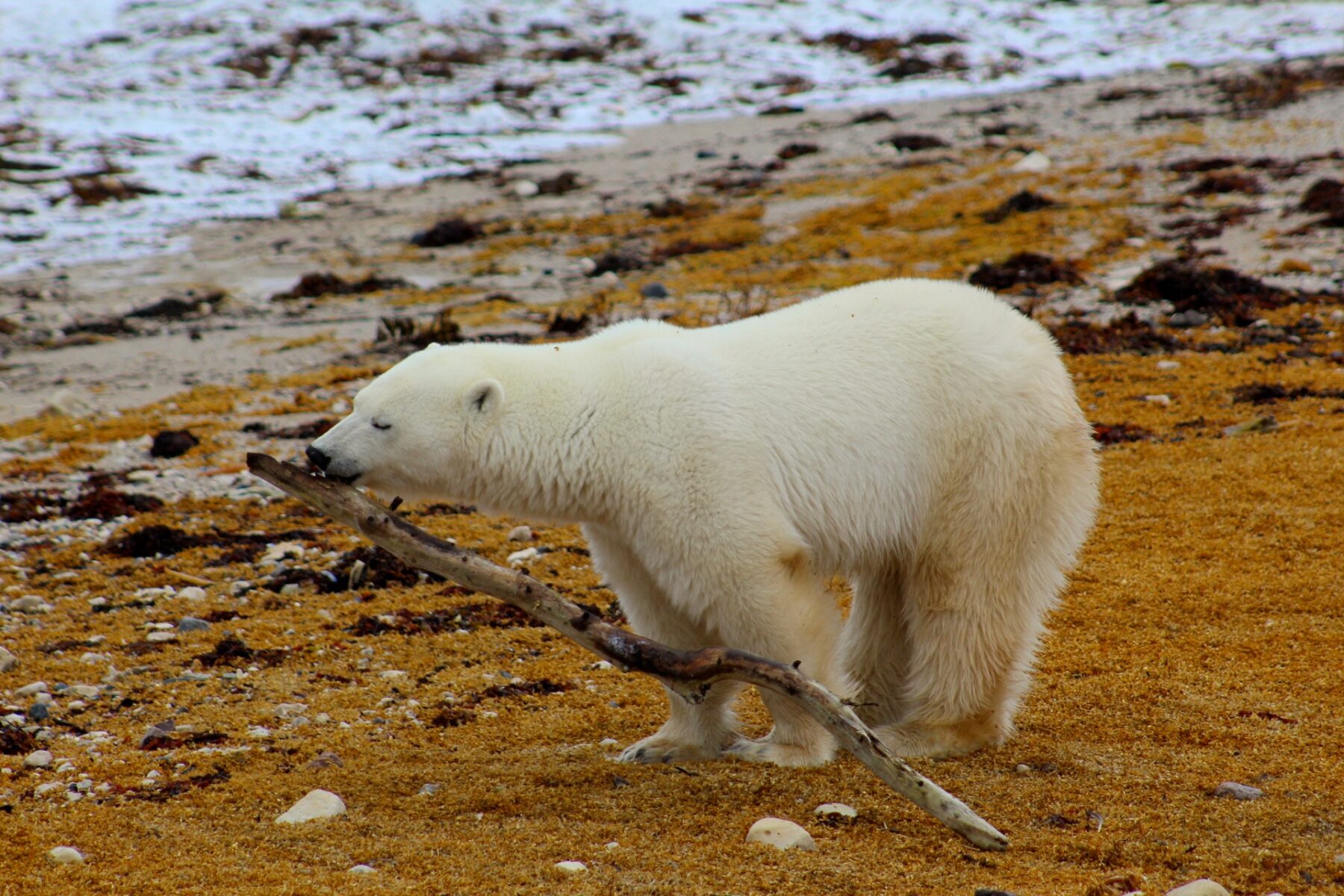 A Cool Story for the Summer Heat

This week’s blog is a guest post written by Kala D., a 2008 Bucktails alumni. Kala earned her bachelor’s degree in Wildlife and Fisheries Conservation from California University of Pennsylvania. In 2019, she graduated from Memorial University of Newfoundland with a master’s degree in Environmental Science. Kala is currently working as an Environmental Project Manager focusing on renewable and aquatic ecosystems.

Dubbed the Polar Bear Capitol of the world, Churchill, Manitoba, Canada, is where the Churchill River meets the Hudson Bay, causing an outcropping of land, creating one of the first places ice forms in the fall. As the water in the Hudson Bay flows counterclockwise, that outcropping of land causes floating ice to be caught and become much thicker, allowing these half-ton bears to migrate further north in search of calorie and fat-rich seals and whales to eat.

During the ice-free months, these bears are caught on land, surviving off scavenged meals, sea grasses, berries, marine birds, and their eggs. Because of climate change, polar bears are now more reliant on their terrestrial diets; however, because the food they eat is not as rich in fat, they can shed a lot of weight during this time. Almost all data collected on polar bear migration is from female bears. This is because males can gain and lose extreme amounts of weight from season to season that the tracking collars would harm them or become lost quickly. Female polar bears do not fluctuate as much from season to season, as they are naturally smaller and provide for their cubs for long periods.

I had the unique opportunity to visit Churchill, staying at the Northern Studies Centre, and participate in some research being conducted on polar bears and the surrounding ecosystem. This trip was in conjunction with The Wildlife Society Conference when the conference was held in Winnipeg, Manitoba. We were able to experience firsthand the danger of having these tens to hundreds of polar bears congregating just outside of the town. Churchill is one of the few places on earth where polar bears tolerate being within proximity to other bears. Polar bears are an isolating species like leopards and rarely come together outside of mating seasons. But these bears travel all over Canada throughout the fall and early winter to get a chance at the sea ice. As part of this trip, we explored the sub-arctic ecosystem via tundra buggy and helicopter. Seeing sleepy bears laying in the seagrass or playing with driftwood just 20-40ft away from the buggy was beyond what I could describe. To experience these large predators and to see them in their natural environments solidified my drive to keep working in the environmental field and doing my part in hopes of preventing continued habitat destruction. Also, seeing a bear power slide across a frozen lake while running to avoid the helicopter hurt my pride since I had slipped hard on ice maybe 30 minutes before takeoff.

One of the best experiences of this trip was touring The Polar Bear Jail. This facility is not open to the public, and we received permission from the Manitoba Government and Polar Bears International – Canada to enter. This ‘Jail’ houses nuisance bears that cause problems within the town of Churchill and cannot be left to their own devices. One bear, in particular, was named Gypsy, an adult male bear who had to be caught yearly. Gypsy got his name because he broke into the Gypsy’s Restaurant every year to eat his fill out of the coolers and baked goods. When I visited, Gypsy was pushing 11 ft tall, making him one of the largest living bears known with yearly data collected. Bears in the jail are not fed, they are given water/snow, and that is it. This is to prevent training the bears to think that humans mean free food. Polar bears can survive for long periods on snow alone, so while this may seem inhumane, the bears are already surviving on less while in the wild. Keepers want the bears’ to be uncomfortable, so when the ice forms and they are released, they do not come back into town. If a bear is considered severely underweight or malnourished, they will not keep them in The Polar Bear Jail. Keepers or Game Officers will fly these bears north to the Manitoba and Nunavut border or where there is already sea ice forming in hopes of giving these bears a fighting chance. This is always a difficult choice to make because hunting for polar bears is still allowed for special permits and indigenous peoples’ sustainability in Nunavut.

Thanks to the opportunities provided by The Wildlife Society, I was able to experience a once-in-a-lifetime research vacation, experiencing a new ecosystem and seeing these beautiful bears in their natural environments. I learned so much and met some fantastic researchers and professionals in the wildlife field, and this trip helped push me to seek my master’s degree just a year later. Due to climate change, these bears struggle to survive season to season, with more human and bear interactions causing harm to people and the bears. You can learn more about the Northern Research Center and its work at its website: https://churchillscience.ca/.