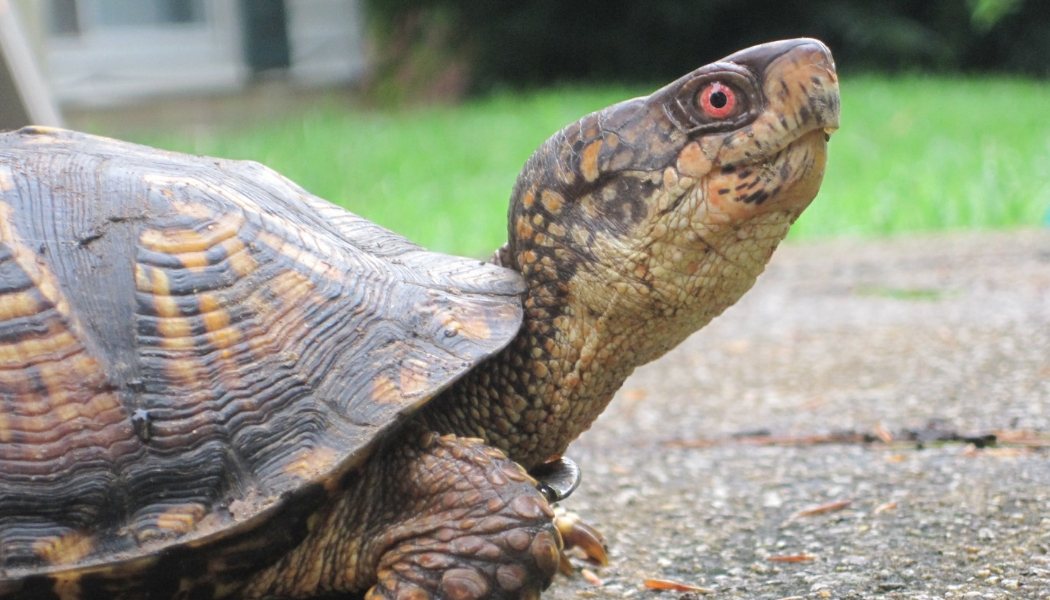 A Visit from an Eastern Box Turtle

This weeks blog post is from Eileen Cox, a Bucktails and Gobblers alumni! She writes about Russel, an Eastern box turtle she spotted in her backyard.

It was a cool summer day. The temperature was only in the 70’s. I was sitting at a desk working on an assignment when I glanced out the back door (which also functions as a window). That is when I spotted it: a turtle ambling across the patio. Where did it come from? The yard is sparsely populated with evergreen and deciduous trees, and encompassed by a fence that reaches to the ground. The turtle must have dug under the fence! Nature never fails to surprise me.

I stepped outside with a ruler in one hand, and a camera in the other. I identified the herp as an Eastern box turtle. I counted an average of sixteen rings per scute, which translates to roughly eight years old depending on the aging method you use. No aging method except known hatch date is precise. Due to the red irises of his eyes, and slightly concave plastron, I reasoned that he was a male. Females usually have brown irises, and flat plastrons.

I measured the shell, which turned out to be about 6” long (which is at the larger end of the spectrum). Unfortunately, I did not take other length measurements, but I estimated 3” wide at the top of the shell, 4” wide at the bottom, and 3” high from carapace to plastron. Then I began taking pictures. I observed as he hiked across the patio, climbed over a low bar, and descended the patio into the grass. I must say that box turtles can move pretty fast for their short legs, and dense bodies! Eventually the turtle wandered away, but first I nicknamed him “Russell.” A few days later, my brother found him again. This time Russell was buried in some needles from the white pine overhead. Another day Russell was found exploring scattered logs from the woodpile.

Terrapene carolina carolina, commonly known as the eastern box turtle, are native to Pennsylvania. You may run into one in the woods, or a place where the ground is layered with wet leaves, or damp soil. The box turtle is an omnivore, and typically feeds on plant matter including leaves, fruits, and mushrooms. Additionally they enjoy small invertebrates such as terrestrial snails, earthworms, and beetles.

← October Student of the Month – Hannah G.
Blooming Bioswales for a Better River →