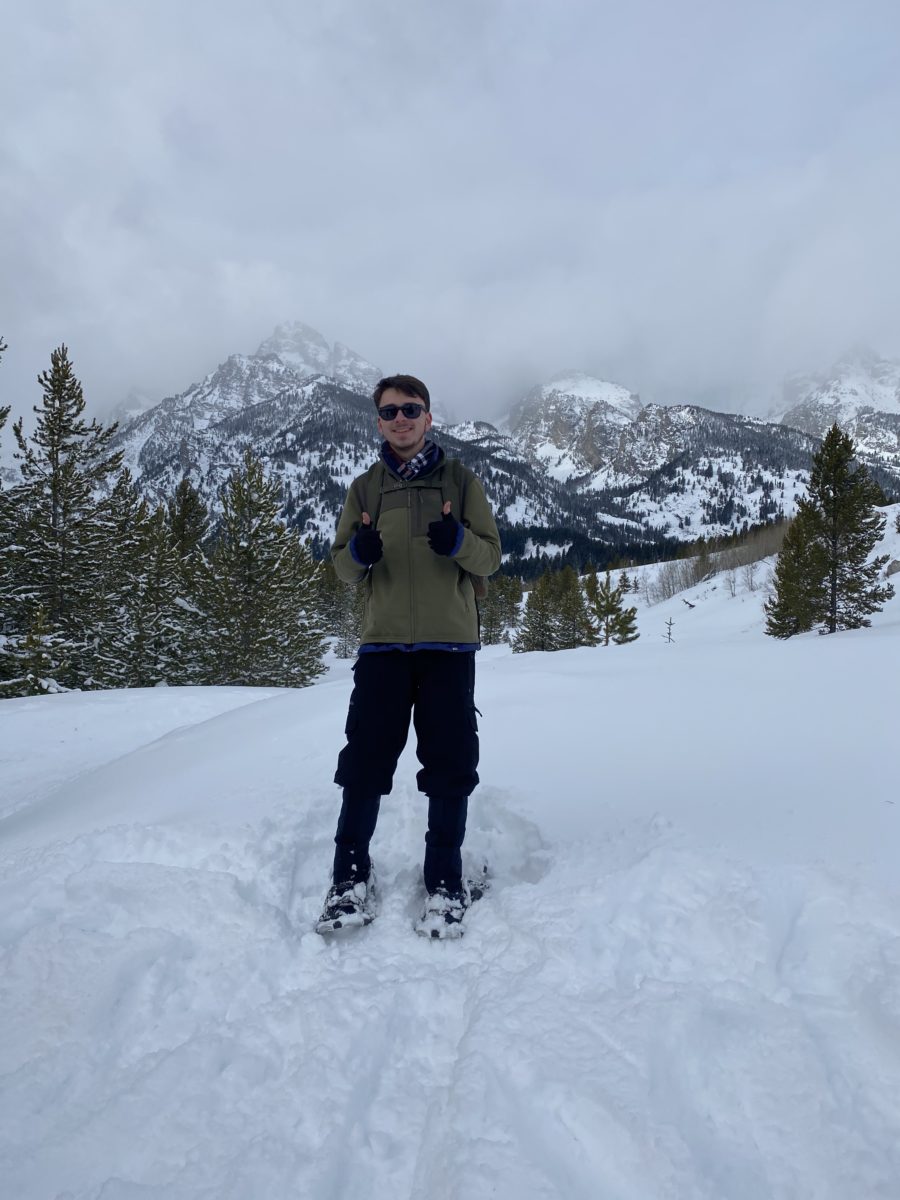 This week’s blog was written by Devin G., a Bucktails alumni. He shares his experience studying in Grand Teton National Park earlier this year.

Early in 2020, I was presented with an amazing opportunity to take a winter ecology class in the heart of one of America’s most beautiful national parks. I was able to study the winter environment of Grand Teton National Park for nine days after the start of the new year. Packing my winter essentials, I could not wait to experience the harsh beauty of the snow-covered environment. When I arrived at the Jackson Airport, the cottage-like aesthetic perfectly complimented the colossal Tetons, barely visible through a thin flurry of snowflakes. A short drive through the park brought me to the Teton Science School’s Kelly Campus, a quaint mosaic of relocated buildings and cabins nestled just within the park’s boundaries.

Awakening early to catch the sun’s first beams of light illuminating the dignified mountains, I was ready to begin the course. The class was split into three major sections, each focussing on a different, yet related subject. To start the week, we were taught the skills of a winter naturalist, three days of journaling, snowshoeing, and observing nature. This part of the class was led by everyone’s vision of a true “mountain man”, Kevin Taylor. A master at all things tracking, he gave us a plethora of tips and tricks in identifying and interpreting animal tracks. In deep snow, identification can be tough, but where the powder hides evidence of what made the tracks, it reveals even more. Direction of travel, speed, and size can all be revealed if studied by a trained eye. Following an indistinct set of tracks and using the skills I learned, I was able to determine that an elk had traveled through the forest, walked across a fairly steep hill, and bedded down under a fir tree for the night. Pairing this skill with others in snow dynamics allowed me to observe the natural world in even greater detail.

The science and dynamics of snow structure was the topic of the following section. Taught by the knowledgable Ben Rossetter, this topic was more in-depth than I ever could have thought, including everything from snow formation to snowpack change and fluctuation. I had known that snow was important to the environment but I would have never guessed the true extent of its significance. Not only is it a reservoir for water in drier seasons, the snowpack itself creates important habitats for small mammals. This subnivean environment allows life to endure the bitter cold of Wyoming winters by creating a more stable temperature through the snows insulative properties. While some animals are able to survive the winter under the snow, others, along with plant species, must endure the frigid cold in other ways.

This was the focus of our third and final section of the course, the wildlife and plant adaptations that allow them to survive bitter winters. For example, aspen trees have a powdery substance on their bark that acts as a sunscreen to protect the tree as well as photosynthetic bark which helps them produce energy when they are lacking leaves. We also discussed three major ways that animals deal with winter conditions, including hibernation, migration, and resistance. Each of these methods of survival depends on unique adaptations that allow for extraordinary feats. Arctic terns are able to fly from the North Pole to the South Pole, nearly 44,000 miles making it the longest migration of the natural kingdom! Moose, on the other hand, opt for resistance and have a few key characteristics that permit their survival. Their ability to lift their legs to eye level allows them to traverse deep snow that would obstruct other species. When it comes to hibernation though, Alpine Marmots take the cake. Entering their burrows in October and emerging in April, these animals can lower their heart rate from 120 beats per minute to a mere 3 or 4!

This post only scratched the surface of my amazing experiences during this course. It was a time of firsts; my first time snowshoeing, cross-country skiing, visiting an elk feed ground, seeing a cougar, and learning that the classic “snowflake” is actually called a snow crystal. I will cherish these memories for the rest of my life and look forward to participating in further opportunities to learn about the world I live in.