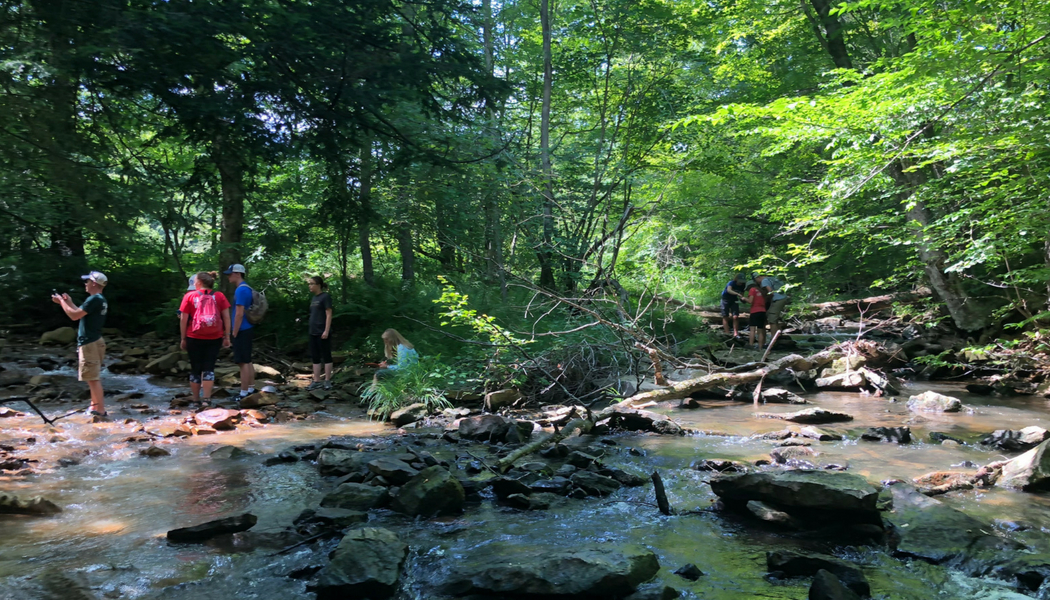 Lenka P., is a Brookies alum and is a junior at Halifax High School. She is a Chesapeake Bay Foundation Student Leader and just returned from the CBF Student Leadership Course “Growing From Our Roots”. Lenka writes about her experience of seeing an acid mine drainage stream firsthand.

The Chesapeake Bay Foundation has a Student Leadership program which I am a part of. Each summer Student Leadership Courses are offered and this summer, I attended the course “Growing From Our Roots.” During the course we traveled around Pennsylvania discovering the ecosystems that are in the PA section of the Chesapeake Bay Watershed. We canoed Penns Creek, learned about fish and fly fished with Trout Unlimited, and hiked around Elk County to find elk. My peers and I explored the Arboretum at Penn State and saw an old growth hemlock forest at Alan Seeger Natural Area. Out of all of these experiences, the activity that stuck out most to me was when we visited the confluence of a pristine stream and an AMD Stream in Elk County.

AMD, or Abandoned Mine Drainage, is when mines leach chemicals, such as iron, into waterways and is a very common form of water pollution caused by mining. AMD is one of the largest sources of stream impairment in Pennsylvania. When we traveled to Elk County, we visited Winslow Hill where there had been coal mines. The mines were covered up, but AMD still runs into Porcupine Run. At Winslow Hill there is a limestone pendulum which uses limestone to make the water of Porcupine Run more basic, but the stream is still impaired.

When we got to the streams, we broke up into groups of which stream we would test. I jumped at the chance to test Porcupine Run because I had never been in an AMD stream before. I wanted to see what I could find. I thought that I may find a few pollution tolerant macroinvertebrates. Even though I knew that the water quality would be bad, I didn’t think it would be devoid of life, especially since there was a limestone pendulum upstream.

At this course, I had the experience of seeing a dead stream. Seeing this allowed me to make the connection to dead zones in the Chesapeake Bay. Toxic forms of water pollution, such as high nutrient levels, are not always visible, but their effects can be felt throughout the food chain. The area of Porcupine Run that we explored was only a few yards away from the pristine Dents Run, but the two streams told completely different stories. Though the impairment of Porcupine Run and the Chesapeake Bay do not have the same cause, seeing the stream is an excellent representation of what is happening with dead zones in the Chesapeake Bay.

This dismaying experience of finding no life in an AMD stream reiterates how important the conservation work that my peers and I are doing. I know that I will continue to do all that I can to protect the world around us.