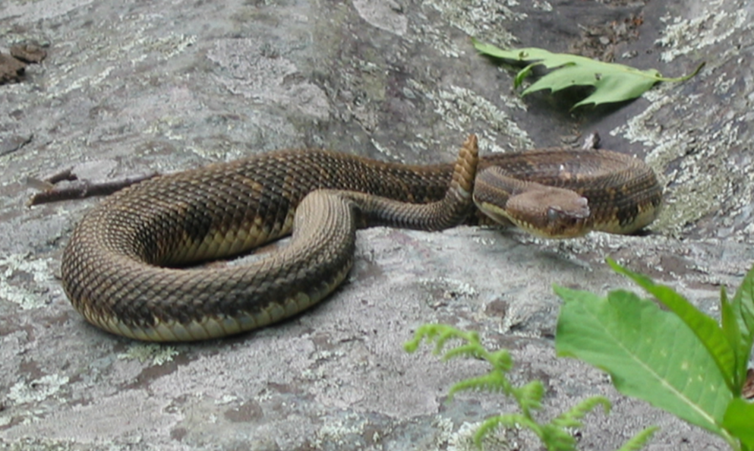 Like any other animal, snakes play an important role in our ecosystems. By feeding on rats and other rodents, they prevent the spread of diseases and protect crops by providing environmentally friendly and free pest control services. On the other hand, they are also prey for birds, mammals, and other reptiles.

However, as opposed to many other animals, snakes are disliked, feared, or even hated by many people, even though, a lot of them have never seen a snake outdoors. The prejudice against snakes can lead to dangerous and illegal actions. I witnessed a fisherman trying to kill a Watersnake by throwing large rocks on it. The completely harmless animal (if left alone) was getting seriously injured and while distressed it attacked the agitated guy. All that is needed is to let the snakes be. Unless we accidentally step on them or handle them, they will not harm us. If a snake is spotted, it is good to use the opportunity and admire it from a safe distance, but not to manipulate it.

Snakes are beautiful reptiles of various colors, patterns, and sizes with many fascinating features. Snakes can eat animals much larger than they are because their jaws are connected by very flexible ligaments so they can stretch. Many snakes are excellent swimmers, and some can even glide for up to 75 feet resembling a frisbee. Out of the 3,500 snake species worldwide, around 600 are venomous. In the United States, only rattlesnakes, cottonmouths (water moccasins), copperheads, and coral snakes can envenomate people even though their venom is less dangerous compared to some Australian or Indian snakes. There are between 7,000 to 8,000 bites by venomous snakes in the U.S. with about 5-6 fatalities each year. Still, it is 3 times more likely to die from being bitten or attacked by a dog and even 9 times more likely from a hornet, wasp, or bee sting than to die of venomous snakebite. Snakes use their venom primarily for overpowering and killing prey and also in self-defense against predators. That is why people can get bitten when the snake feels threatened or cornered.

Out of the total of 21 species of snakes in Pennsylvania, only the Northern Copperhead (Agkistrodon contortrix mokasen), the Eastern Massasauga Rattlesnake (Sistrurus catenatus), and the Timber Rattlesnake (Crotalus horridus) are venomous. Fortunately, none of these species of snakes are aggressive and they are not commonly found in Pennsylvania. The Eastern Massasauga Rattlesnake is actually endangered, with less than half of its historical population still alive. The U.S. Fish and Wildlife Service has developed a recovery plan for it. The Timber Rattlesnake is more frequently seen of the two rattlesnakes and is significantly bigger, reaching up to 5 feet while the Easter Massasauga does not get much larger than 2 feet. When a rattlesnake feels threatened, it coils, hisses, and shakes its rattle. The rattling sound should warn everyone to keep out. Baby rattlesnakes don’t have rattles until they shed their skin for the first time.

Out of the 3 venomous snakes, the Copperhead is most common throughout Pennsylvania. Adults average at a length of 2-3 feet. The Copperhead and the Northern Watersnake (Non-Venomous) are often confused since they have similar colors and patterns. However, the Copperhead can sometimes be identified with its Hershey Kiss/dark triangle pattern along both sides of its body. Even though the color and patterns vary, they can help to distinguish a copperhead from a Watersnake which has dark blotches that do not resemble a triangle.

Patterns and colors are very subjective, so if you have even a slight suspicion that the snake is venomous, keep an extra distance. The myth that venomous snakes have triangular heads is true and applies to venomous Pennsylvanian snakes, however, it can be deceiving because Watersnakes often flatten their head forming a triangle to imitate venomous snakes. A similar defensive strategy is used by Hog-nosed snakes (Heterodon platirhinos) who can spread the skin around their head and neck, similar to a cobra, and pretend striking. They can even play dead, rolling onto their back and gaping with their tongue hanging out of their mouth.

The highest risk of getting bit by a venomous snake is by stepping on it. All three of the Pennsylvanian venomous snakes prefer wooded areas where they camouflage very well. This is why it is important to wear closed-toed shoes when hiking and watching where you step. All snakes in PA are protected by the Pennsylvania Fish and Boat Commission. The Timber Rattlesnake and Eastern Copperhead are protected under additional regulations.

Snakes do not need to be feared and for sure, they should not be harmed. Without their role in maintaining balance in the ecosystem, there would be drastic consequences for other animals and our environment. If someone still does not find snakes interesting and important, it is good to know that venoms of some snakes are used in drug discovery and there are already drugs based on snake toxins used to treat high blood pressure.

← October Student of the Month – Mary Grant
Mentoring the Next Generation →