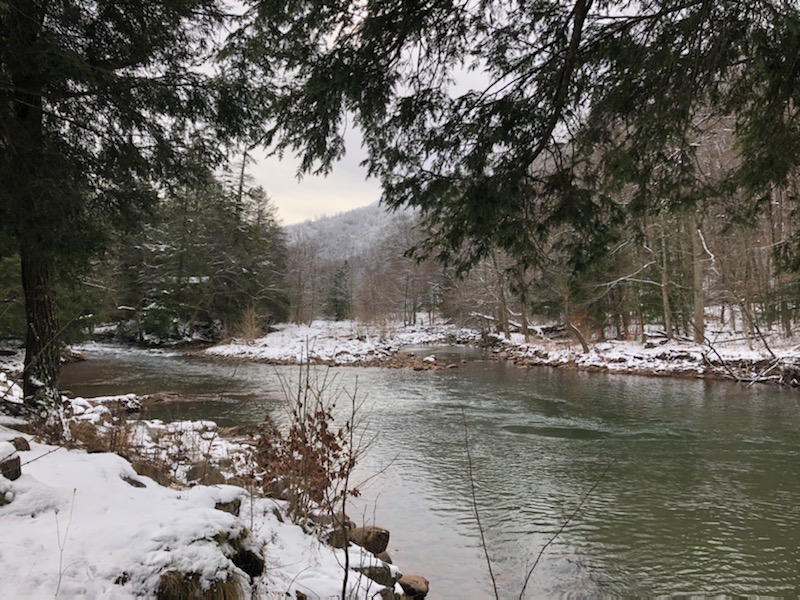 To conclude the fishing season of 2020, my family set out to the Elk River in Alleghany Mountains. This West Virginia’s premier trout fishery has a mix of wild brook trout and stocked hatchery-raised rainbows, golden rainbows (9 to 1 ratio of rainbow to golden trout), browns, and brook trout (much less stocked).

It was just a couple of days after a snowstorm with temperatures below freezing point and we did not expect the fish to be very active or aggressive. At first, we stopped by a hatchery on the banks of the Elk to admire both the rainbows and golden rainbow trout. The golden trout have been selectively bred by the West Virginia Division of Natural Resources biologists. This mutated strain of regular rainbow trout is a prized catch among anglers, for its bright yellow color. While we were taking pictures, a great blue heron was unmistakably ignoring the no-fishing rule in one of the hatchery ponds, and it was not the only hungry creature around. Among many tracks in the deep snow, we discovered that otters were frequent visitors of the hatchery. The tracks clearly confirmed that the reintroduction of river otters by the Division of Natural Resources succeeded in West Virginia.

Finally, we climbed down the steep bank and immersed ourselves into the catch and release section of the Elk. Articulated streamers worked surprisingly well, and we caught over 20 brook trout, a few wild brown trout, and countless rainbows up to 25 inches on our first day. On the second day, we fished at Whitaker Falls in the lower section of the Elk River. The very clear water required a light line and a long leader. We plan to be back to explore the deep pools, undercut banks, and shallow runs of the Elk River in spring, when the river experiences some of the best hatches in the Eastern U.S.