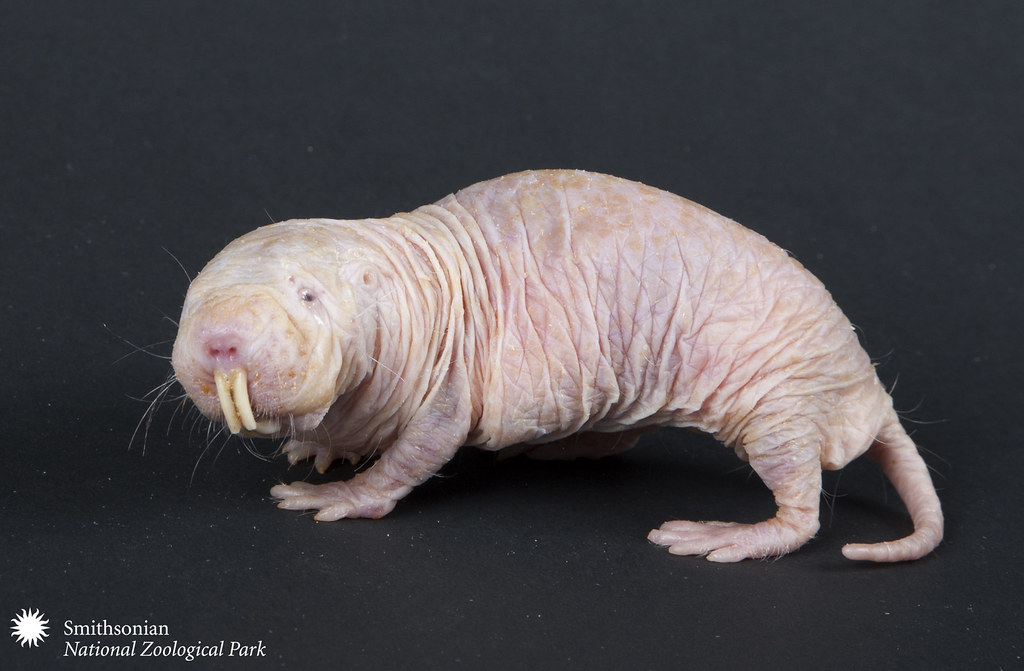 This week’s blog was written by Maddy C., a Ursids alumni. She is 17 years old and loves learning about animals. Maddy thinks that the variations among species are fascinating and she likes researching animals that may not be appealing to other people. She is looking to major in animal sciences in college and become an animal behaviorist.

Though naked mole rats can run backward as fast as forward, it is actually one of the least interesting facts about this species. As the name suggests, these animals are small pink rodents with very little hair and an aptitude for digging tunnels. Naked mole rats can be found in large burrow systems in eastern Africa. In these burrows, they create chambers with unique purposes like food storage, farming, nursery, and even a toilet. When their communal toilet chamber gets too full, they close it off and create a new toilet chamber. They have no external ears and extremely poor eyesight so they rely on their sense of smell and attuning to the vibrations around them.

Their diet consists mainly of underground portions of plants, especially tubers, and they’ve learned to leave a portion of the tuber behind, so it can regrow, and they can harvest it again. Through these plants, naked mole rats receive all of the fluids required to survive, so they don’t need to drink water. Their high amounts of gut fauna assist in digesting the otherwise difficult to digest cellulose in their diet. In addition to this, naked mole rats regularly eat their own poop in order to receive all possible nutrients from their food. As gross as this may sound, it ensures that the nutrients in their food don’t go to waste and are absorbed into their systems so they can spend less energy finding food.

Though they are technically considered mammals, naked mole rats’ behavior and physiology are more similar to insects, reptiles, and even plants. Like some insects, they live in groups called colonies in which there is one breeding female called a queen, and the rest of the species are workers. Their colonies can have up to 295 members but typically consist of 70 individuals. Females battle for the position of the queen when the old queen is weak, sick, or dead. These battles are extremely intense and can involve using their incisors to stab their opponents. The winner is dubbed queen, changing her biological structure to fit that of a mother. This change includes growing longer and expanding the gaps in her vertebrae to bear children. The queen chooses 2-3 males to reproduce and all other males become workers along with the females. The queen is also known to be more fertile compared to other females of the same colony. Though it is unclear exactly why this is, theories suggest that the queen releases pheromones in her urine to alert other naked mole rats of her dominance.

Another theory explains that the fertility of the workers is suppressed by the queen’s aggressive behavior toward them. Along with shoving and trampling other naked mole rats, the queen must reproduce several times annually to keep her position.

The members of a colony are closely related to one another due to high inbreeding. Despite little genetic variation, naked mole rats have the largest known litter size of any mammal. They produce an average litter of 12 pups, and a maximum observed litter size of 27 pups. The queen nurses the pups for about a month and they begin to show working behaviors at 3-4 weeks old.

Naked mole rats have the longest lifespan of any rodent, living up to 30 years in captivity – three times longer than standard lab mice. This may be due to the fact that they have the lowest metabolic rate of any mammal. However, this low metabolic rate makes naked mole rats essentially cold blooded like reptiles, so they must thermoregulate by moving to hotter or cooler tunnels and huddling together to conserve energy. In addition to this, naked mole rats can survive up to 18 minutes without oxygen, which makes sense considering they live underground with low oxygen and high carbon dioxide. To put this into perspective, a mouse can only survive 45 seconds without oxygen and humans can only survive 3 minutes. This is because naked mole rats have the unique ability to switch their fuel reserves between glucose, which needs oxygen to become energy, and fructose, which doesn’t. Humans can store energy from fructose as fat, but we need to convert fructose into glucose before we can get energy from it. Naked mole rats, on the other hand, have an abundance of a specific enzyme that can turn fructose directly into energy. This ability to make energy from fructose is more similar to a plant than any other animal.

Some of the most scientifically baffling facts about naked mole rats are their high cancer resistance and their inability to feel certain kinds of pain. They produce a particular substance called hyaluronan which prevents cancerous cells from excessive reproduction into tumors. Some studies have found that blocking the production of this substance in naked mole rats results in the formation of tumors. Not only are naked mole rats almost cancer immune, but they are completely insensitive to certain forms of pain. Studies have found that they are born with the same amount of pain sensors as they should have, but greatly reduce this number in their adulthood. They found that when naked mole rats were in contact with acid, their nerve fibres did not respond to it as pain at all. This is believed to be caused by a tiny difference in one specific molecule in their pain sensing nerves that turns acid into an anaesthetic. Though naked mole rats are impervious to some chemically induced pains, they can still feel pain in relation to pressure and heat.

One of the photos used in this blog was sourced from the internet! It can be found here. The other photo belongs to the author.

← Rollin’ on the River
November Student of the Month – Haley S. →