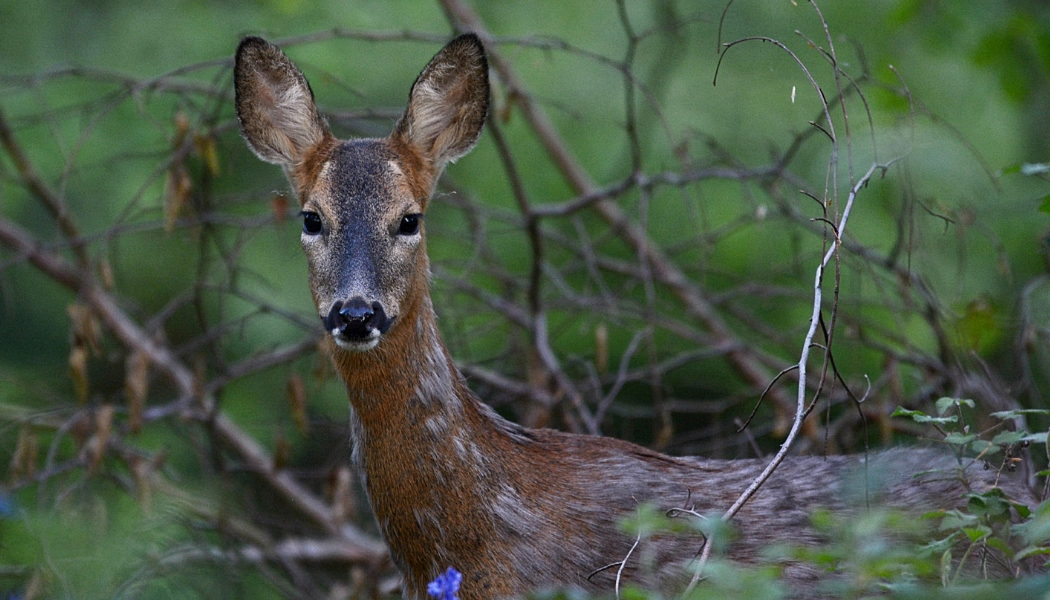 On The Hunt: My Lucky Day

This weeks Bonus Blog post was written by Rosalie S., a Bucktails Alumni! She writes about a thrilling hunt.

Ever since the season started, I wanted to spend as much time in the woods as I could, and even school nights were not an exception. I looked forward to the few hours in the woods I could manage after school all day long. I didn’t worry about school work when I was up in my tree: hunting was a way to escape that. Sometimes if I had a lot of work to do, I would take some with me, but otherwise, my mind was focused on the woods. That day, I decided to instead finish a few assignments before I left for the woods. I was a little late getting up into my tree, but everything worked perfectly in the end. With renewed knowledge of where the deer were coming from based on a few past hunts, I climbed a tree that overlooked a feeding area. I couldn’t get very high in the spindly white oak, but it would do.

I was off of the ground far enough that I was no longer in the deer’s line of sight. I finally settled around 4:30 and began my hunt. Within half an hour, I caught a flash of movement about 60 yards up the hill from me, and after further investigation, I made out four different deer. I watched them intently, bow ready, hoping that they could step into the range of my bow, but they never did. The deer slowly wandered the opposite direction and my pounding heart quieted. However, it was not for long. I caught another flash of deer that I only saw briefly. It turned after about 5 minutes and headed down the way it came. About 10 minutes later, another deer did the same exact thing. It hung around for about 5 minutes and traveled back down the hill.

The still between deer was longer this time, but eventually, my heart quickened again. However, this time it accelerated at a much faster rate. A doe had snuck up on me from my left side and was about 25 yards when I saw her. I already had my bow ready and quickly attached my release to the string. But as I identified my target fully, I realized that the doe was small, this year’s fawn, and I frowned to myself. I didn’t want to shoot a fawn this early because I had time left in the season, and besides, the fawn still needed time to grow.

Another deer emerged behind it, and I had a sneaking suspicion that it was a button buck, even more of a reason not to shoot. As I watched the fawns, I noticed more movement behind them. Two mature does stepped out about 50 yards away and I reckoned that the group of them were a family. I hoped that the bigger does would meander their way towards me, but it didn’t look like it was going to happen.

The fawns came closer yet, stepping into about the 10-yard range, and I had to fight myself not to shoot. Eventually, the group wandered up the hill, oblivious to my presence, and disappeared over the ridge. My wait began again. I usually check which way the wind is blowing periodically throughout the night. The wind had cooperated and the thermals were in my favor for most of my hunt, but to my disappointment, the wind switched to blowing directly down the hill, which was the worst way for it to blow.

Immediately, I heard a deer snort coming from just out of my sight. I listened for a thunder of hooves through the leaves as it fled from my scent, but to my relief, I heard nothing. The deer had done nothing more than snort, but snorting itself was enough to ruin a hunt. I knew that because of those few snorts, my hunt may as well be over, but I was wrong.

About 10 minutes later and 15 minutes before dark, I caught movement out of the corner of my eye. There was something approaching me head on. Slowly and cautiously, I grabbed my binoculars and leveled them on the deer, checking and hoping for it to either have no antlers, or antlers big enough for me to shoot.

After thorough identification, I was positive that the deer approaching me was a lone doe. With the wind no longer in my favor, the doe quickly caught my sent and grew cautious. I could see her eyes darting around and every few minutes, she would look directly at me. I stayed still enough, barely even breathing, to settle her down enough for her to continue feeding. The doe was at about 35 yards and was still coming when suddenly she made an abrupt turn and started paralleling me. I predicted her path and ranged a tree, about 32 yards, where I was going to make the shot.

To my relief, she followed the plan perfectly. I drew my bow as she was still walking into the shooting lane, but she didn’t stop. As I quickly realized she wasn’t going to stop on her own, I grunted at her. It was a quick, low sound, but enough to make her halt in her tracks and wonder where the source of the noise was coming from. It was fairly dark now, but I could still see enough to make a good shot.

I took a deep breath, leveled my pin right behind the lower half of her front shoulder, and tapped my release. The arrow released with a twang and landed with a thump. The doe jumped, but didn’t kick, and made such a sharp turn to head in the opposite direction that I was surprised that she didn’t break a leg. I’ve never seen a deer run faster than she did at that moment. I watched her for as long as I could before she disappeared into the darkness. I listened for any noise to indicate that she had piled up and thought I could make out a faint crashing, but I wasn’t sure.

As I got my breathing to settle, I replayed the shot in my head. I heard a thump after I shot the arrow, but it didn’t sound like the familiar noise of hitting a deer, but more like the noise of hitting a tree. The doe didn’t kick or stumble like deer usually do when you hit them; it almost seemed like I had scared the bejeezus out of her instead. I wasn’t feeling great about the shot, but I’ve learned not to judge until the arrow is found. I’ve been surprised before, and will probably be many more times in my hunting career.

I texted my dad that I had potentially hit one, and we met up at the tree that I had climbed. I gave him a rundown of the night and filled him in on all the details about the shot I took at the doe. Before long, we found a few drops of blood, nothing crazy, but blood meant that I hit her somewhere. We found the arrow next, broken in half, but coated in blood. I was starting to feel better about the shot already. We began to track the blood trail. There were times when we would follow it easily, but there were other times that we had to search on our hands and knees.

Finally, after following the drips, my dad decided that we should give her a few more minutes. I agreed and we marked the last blood on my GPS. From there, we transported my climber stand back to the house and ate a quick dinner before heading back up to hopefully recover my deer. We found the trail again and quickly picked up on more blood. We had brought a very large, bright light this time to help us look and it wasn’t long before my dad spotted a deer. However, this one was alive. It was bedded down, head up, looking at us, but we couldn’t see any blood around it or on its fur.

To my relief, the blood trail led us away from the beaded deer and we crept away from it. We tracked the blood in total about 120 yards before my dad lifted up the flashlight and saw a white belly about 20 yards in front of us. We walked up to it, assessed the shot, which was a little far back, but still fair, and pulled out the first yellow tag of the year. I was proud to tag such a majestic creature and my dad and I bowed our heads over the down animal and thanked the Lord for the deer’s life.

We took a few minutes for photos before we gutted the deer and started the long drag home. Overall, I was, and still am, extremely thankful for having the chance to harvest the deer. With the season still early, I hope that I can fill a few more tags. Good luck to any other hunters out there and happy hunting!

The photo in this blog was sourced from Flickr Creative Commons. It was taken by Kelly Simonds, and you can view the original post here: https://flic.kr/p/TBYiht