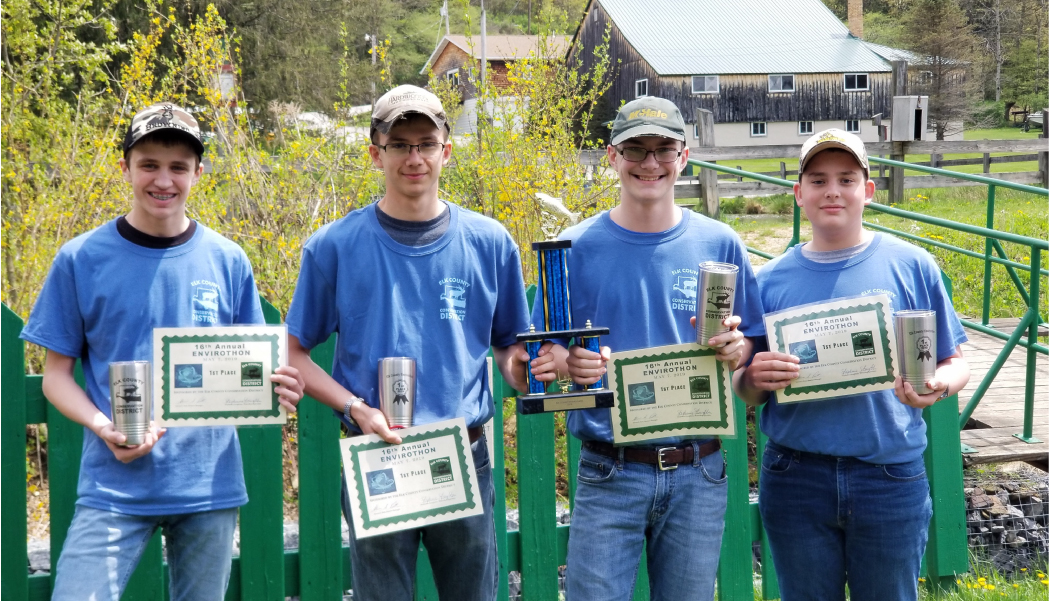 Participating in the Pennsylvania Envirothon

This weeks Blog Post was written by Zachary M., a Gobblers Alumni! He writes about his Envirothon team, and the diligent work they out into competing.

The Pennsylvania Envirothon is an annual environmental education program for high school students. The event consists of several field tests on five subject areas, which include Soils/Land Use, Aquatic Ecology, Forestry, Wildlife, and a current environmental issue. The current issue changes every year; this year’s the topic was Agriculture and the Environment: Knowledge and Technology to Feed the World. Teams that compete in the competition consist of five high school age students. Participants also must give an oral presentation to a panel of judges, on the current topic. This presentation is only given at the state level. Teams must attend and win their county’s Envirothon before moving on to the state-wide event. The top team from the state event then moves on to the national competition.

My team and I began our preparation, as many teams do, very early. In fact, my team has been preparing since the seventh grade. I say this because Elk County hosts a Junior Envirothon for middle school aged students. Both years we participated in the Junior Envirothon we placed. Our first year we didn’t study much and went mostly with our basic prior knowledge. We placed third, learned what the event was like, and how/what to study. My team and I determined that we were going to put in more effort the next year and try to win. The following year, we prepared and studied the sections we did the worst on. When the test day finally rolled around, we were far more ready than the prior year. It paid off because we ended up placing first.

This year, we participated in the actual Envirothon event. The Ecology Club at the high school was looking for teams that wanted to go. Our school hadn’t sent anyone to the local competition in several years, but thanks to the Ecology Club Advisor, two teams from my school were contenders. Throughout the busy school year, our two teams met twice a week during our advisory periods to study. We also had presenters from the conservation district come it to discuss topics relevant to the Envirothon. Our Ecology Club also sponsored a few separate study days in preparation for the competition. The day before the Envirothon, one of our team members became unable to go due to personal reasons. We decided to just go with four people rather than try to grab someone at the very last minute to fill his spot. The next day, after taking the tests and anxiously awaiting results, it was announced that we had placed first, and the other team from my school placed third. That meant we would be going to the University of Pitt at Johnstown to compete against all the other counties.

As May 21st and 22nd grew closer, we began to plan our oral component and meet outside of school to study. Unfortunately, we found out while registering that since we only had four people, we could only be registered as exhibition. All of us knew that it would have been very difficult to place anyway, so it sort of took a little bit of the pressure off. Either way, we would still get to experience it and learn how everything was run for the next year. Once we arrived at the UPJ, we made our final preparations for the presentation, changed into our dress clothes, rehearsed what we had put together, and made our way to the building where we would have one hour to prepare. Overall our demonstration went well, despite a few small errors. Subsequent to the presentation, we relaxed and looked over references and materials for the next day.

We were up at 5:00 am sharp, grabbed a bite to eat, listened to some of the bird and amphibian calls we needed to know, and set off for the contest. Our first station was the forestry test, and I won’t sugar coat it, it wasn’t good. Fortunately, that was the hardest section of the whole day. After we returned home, we had to wait until the results we posted to see how we scored since we were exhibition. We did alright, learned how it is run for next year, and enjoyed ourselves which is all that matters.