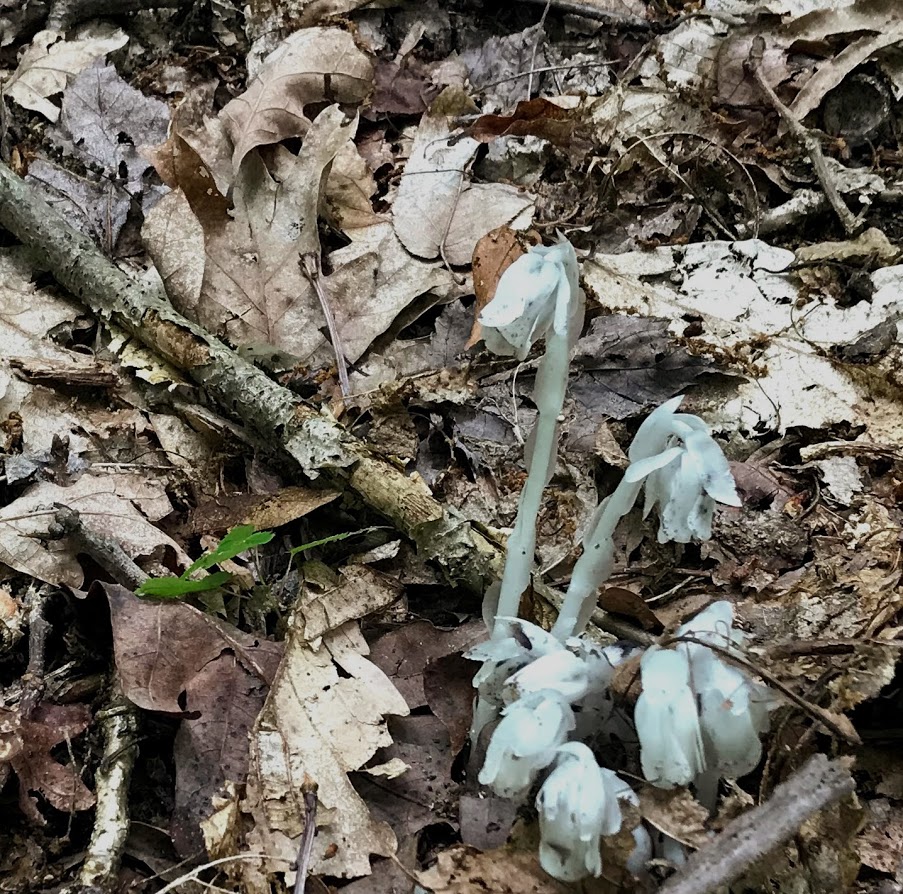 Plants From Beyond the Grave

This week’s blog was written by Emma C., a Bucktails alumni. Emma is an avid student, ballet dancer, and nature lover. When not at dance or school, she enjoys hiking, photography, painting, watching musicals and movies, learning interesting histories, and especially reading. She is particularly interested in science at this time, advancing to the state science fair last year. She was extremely excited to attend the Academy because as she puts it, nature is her, “safe place” where she feels at home. Her favorite quote is by the brilliant scientist Rachel Carson, “One way to open your eyes is to ask yourself, ‘What if I had never seen this before? What if I knew I would never see it again?'”

From Sasquatches to fairies to ghosts, people have always seen outlandish things in the woods. Never seen one before yourself? It may be more likely than you think. During a light hike through a park near my house, I came upon a rather odd plant — an all-white structure from the tips of the flower to the very bottom of the stem. When I first looked at the small sprout, it appeared almost translucent, as though it were a piece of plastic or glass. After further inspection, it was clear to see that it was opaquely white. The petite plant had a short stem, and a bell looking flower that curved over to face the forest floor. It looked quite out of place compared to its very green and lively summer surroundings; almost otherworldly. After doing some research on the plant, it appears others agree with me.

Commonly known as the ghost pipe–also called Indian pipe or corpse plant–Monotropa uniflora is one of only about 3,000 non-photosynthetic flowering plants. This unique characteristic is the reason this plant has no green on it since it does not need the green chloroplasts to capture energy from the sun and complete the process of photosynthesis. Instead, the plant is actually heterotrophic like us humans, compared to autotrophic like most other plants. This means that instead of making nutritional food for itself, the ghost pipe must get its food from an outside source. Most of these heterotrophic plants have parasitic relationships with other organisms. Some can be directly parasitic to another plant, but the ghost pipe is a bit more tricky. Ironically, while the ghost pipe is commonly mistaken for a type of fungi, it is actually most often parasitic to fungi engaged in mycorrhizal relationships.

Interestingly, the ghost pipe is actually a part of the blueberry family. Native Americans once used the plant for medicinal purposes, including treating eye infections. It usually grows to be about 4-8 inches tall, has five-petaled flowers, and has only one flower per stem. The plant is usually found in a small cluster as I observed it, though you could perhaps find a single stem by itself. Since it has no need for sunlight, it can grow in great darkness and shade. The startling plant can be found across the United States (though it is absent from the Rocky Mountain region) as well as parts of Asia (such as Japan).

The sneaky and otherworldly ghost pipe is another one of nature’s great wonders. It represents the great diversity of life we have on this planet, and the unusual connections among organisms we often miss. When I stepped into the woods that day, I had no idea I would find such a fascinating plant. It just goes to show, you never know what you will find in nature. We must always be searching, discovering, and learning more about this vast planet. Who knows what we will find next!

The photo used in this blog belongs the author.

← Oil Drilling and Spills: Their effects on the Environment and Wildlife
December Student of the Month – Lorelei M.-B. →