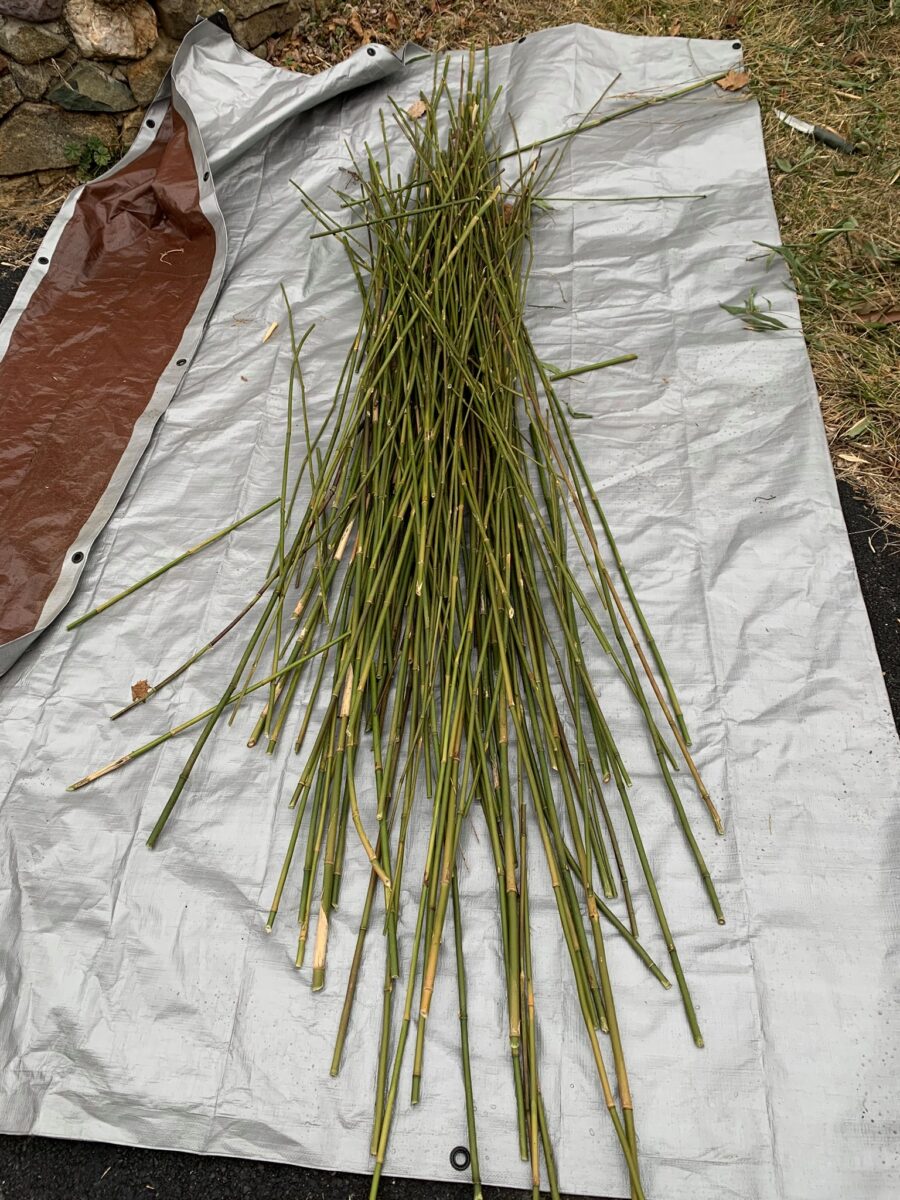 When you harvest rivercane and you finally find it, you almost feel like you’ve been transported to China because what you’re looking at resembles the larger, taller stalks of bamboo native to China. Instead, rivercane represents the only bamboo grass indigenous to North America, specifically the Southeastern portion. Over time, rivercane has become threatened due to overuse of the land, but this important plant is vital to the health of the surrounding ecosystem. Its uses to humans are documented by many Southeast Woodland Indigenous nations traditionally, providing a practical and aesthetic role.

Rivercane, quite simply, is a type of bamboo and grass. It is native to the Southeastern United States, particularly in the Appalachian region. It grows in patches called canebrakes, which signifies the area as containing rich and fertile soil, compelling farmers to clear those areas for agricultural use. There is a large root-like structure named a rhizome that grows under the canebrakes and connects the river cane through a complex underground structure.

A rivercane stalk can live up to fifty years before it blooms. It will only bloom once, as blooming is the sign of the plant’s life. All the cane in the canebrake will simultaneously bloom and die. The good news is that the rhizome will plant new rivercane and the cycle will start over again. As long as the underground network of roots is left alone, the area will continue creating rivercane which, in turn, keeps the area from eroding and adds to the fertile balance of the land. Unfortunately, as previously mentioned, the quality soil surrounding rivercane makes it desirable for farming and overgrazing the land. When this occurs, the rhizome is trampled, uprooted, and destroyed, killing off canebrakes. Since rivercane takes so long to grow, correcting these imbalances is difficult and the general population doesn’t understand the value of preserving such an important plant.

Much can be learned from the Southeast Woodland Indigenous nations when it comes to rivercane preservation and use. For centuries, these communities have used rivercane as a way to measure ecosystem health, in everyday living, and for ceremonial purposes. Not until colonization did rivercane become threatened and the push for conservation still comes from the Indigenous communities.

For the Cherokee specifically, rivercane is tied to nearly all aspects of life. This strong plant is the basis for baskets used for fishing, carrying food, storing household items, and hanging storage traditionally. Today, Cherokee rivercane baskets are highly valued because of their intricate weaving, durability, and beauty. Similarly, rivercane was and still is used for mats, wall hangings, and wattle and daub support structures. Many of the artists who work with rivercane, like Cherokee National Treasures Shawna and Roger Cain, are the biggest advocates for protecting rivercane.

From a food perspective, Cherokee hunters monitored rivercane because game is attracted to the canebrakes for easy and bountiful eating. For humans, the shoots can be eaten in early spring and summer for nutrition. Used as stakes, rivercane provides structure for growing plants and drying fish and meat. The cane is also useful for making traditional fish dams and in many hunting and practical tools. Rivercane was and is still used to make blowguns, arrows, knives, atlatl, darts, and many other objects. Mister Noel Grayson, a Cherokee National Treasure, told us on a trip to the Cherokee Heritage Center, “if we could use it as a tool, we used it.”

Rivercane used to exist all over the Southeastern United States and needed to be controlled through prescribed burning by respective Indigenous communities. Today, its existence is threatened due to farming, overgrazing, industrialization, and suburban growth. Caring for this plant is important because it tells us so much about the environment and plays a vital role in maintaining ecosystem health. Plus, it is an important factor to so many Indigenous communities and their heritage. Rivercane has helped so many people for centuries. Surely we must dedicate our time and energy to saying wado (thank you) for its sacrifices by preserving it and helping more canebrakes survive and thrive.

A special thank you to my Aunt Jules Thornton-Brison, Roger and Shawna Cain, Melanie Packer-Schneider, the Cherokee Heritage Center, and The Appalachian Voice for their advocacy, knowledge, and commitment to river cane and helping me be a better conservationist.

Postscript: Through a grant from the Foundation for Pennsylvania Watersheds, Lorelei purchased a traditional fishing basket made from rivercane by Cherokee National Treasure, Mike Dart, and has and will continue to the equipment an educational tool when teaching on Indigenous waterway health and methods. She used the tool in teaching Indigenous Natural Perspectives at the Academy’s 2021 Virtual Field schools.