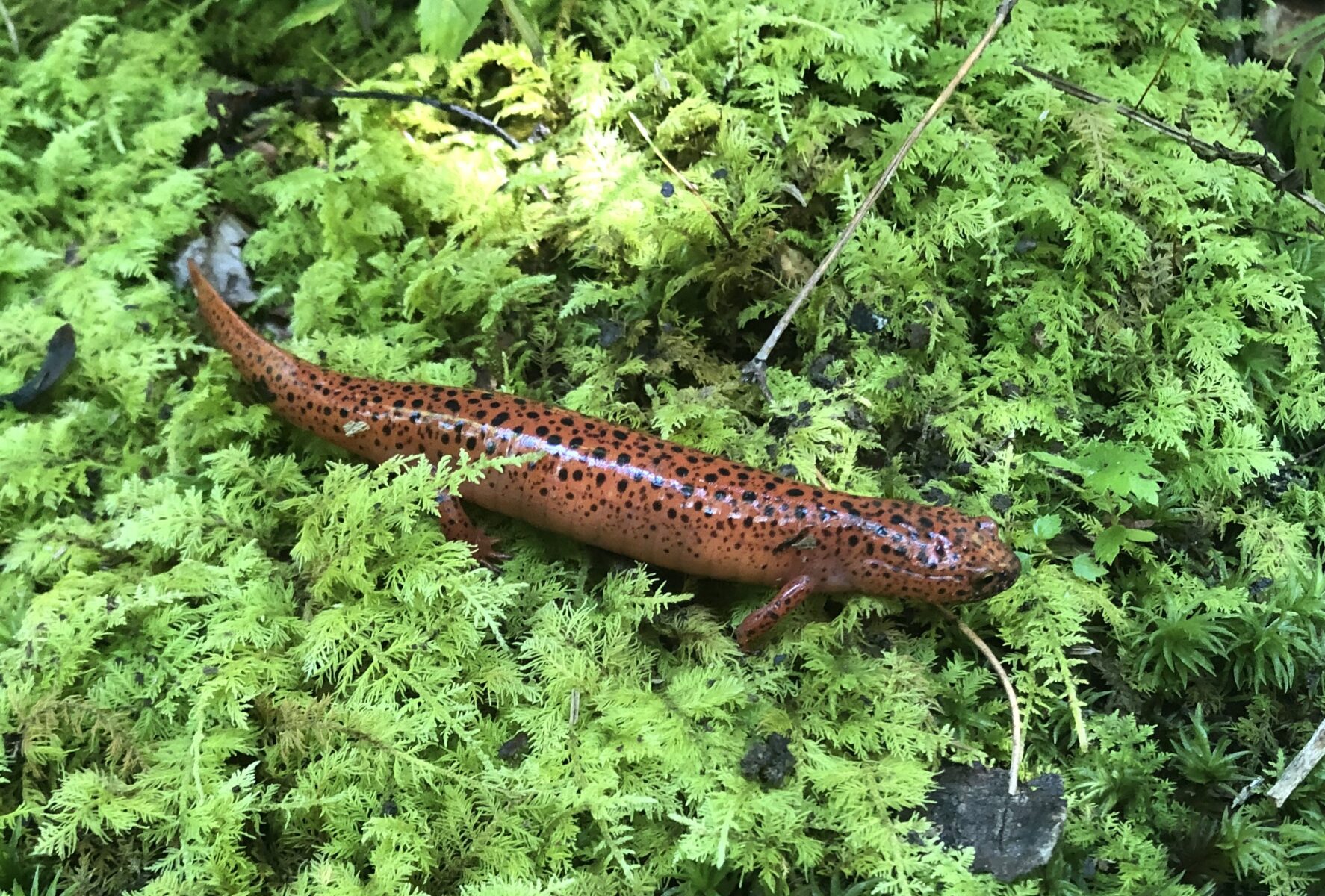 Salamanders – Where to Spot Them and How to Protect Them

This week’s blog was written by Joseph S., a Brookies alumni. He is mainly interested in reptiles – especially snakes, amphibians, and fish. Joseph has many reptile species and both fresh and saltwater fish at home in the pond in his backyard. Joseph enjoys hiking and kayaking in national parks, state parks, and wildlife refuges. He would like to become a herpetologist or toxicologist.

Even though the eastern United States has the highest diversity of salamanders in the world and some of them are brightly colored including yellow and orange, it can be quite challenging to find them. This summer, I settled to discover at least some of over 70 salamander species living in the Appalachian Mountains region.

I have started in the most renowned spot for salamanders, in the Great Smoky Mountains also known as the “Salamander Capital of the World”. Being thrilled by the National Park Service’s statement, that the great majority of vertebrate animals, including human visitors, in the park on any given day are salamanders, I was expecting to find a couple of them in almost every stream I hiked along. However, my first day was quite disappointing, since I met many more human visitors than salamanders. I followed the instructions on posters in the park not to move rocks, because, the largest salamanders of the Great Smoky Mountains, hellbenders, sometimes reaching the length around 2 feet, lay eggs under them. Rearranging parts of hellbenders’ habitat might harm this sensitive species. It would be something to find a hellbender, but at the end of the day, I was excited finally spotting a tiny, camouflaged salamander. It was a fragile-looking brownish creature, which even did not give me a chance to take a picture of it. The most exciting discovery came the next day. The secretive lifestyle of salamanders was betrayed by the vivid color of a beautiful red salamander resting on a pillow of moss. It was more patient with me, and I documented it with my camera. Still, as a couple of salamanders found in the morning, it was surprisingly fast on its short legs. Since I already knew that salamanders are shy and cryptic animals, I came much better prepared to search for them during my September hike in Shenandoah National Park. With my camera ready to use, I checked moist spots around logs, rotten stumps, and the edges of shallow streams. It was cooler and more humid than 2 months ago in the Great Smokey Mountains. Along a wooded 3-mile trail, I counted over 40 salamanders consisting mostly of White-spotted slimy salamanders and small terrestrial Red-back salamanders.

Even though I observed many salamanders in one day, this amphibian family is not abundant. Approximately half of all salamander species are listed as threatened. Since salamanders are very closely linked to their environment, the main threats for them include habitat destruction and water pollution. Salamanders might be small but they play a vital role in their ecosystem.

If a salamander is found, it is important not to touch or handle them. Salamanders have extremely sensitive skin that can be damaged even by a light touch. Logs and leaf-litter are important habitats where salamanders reside. Natural areas should be left as natural with minimum alterations.