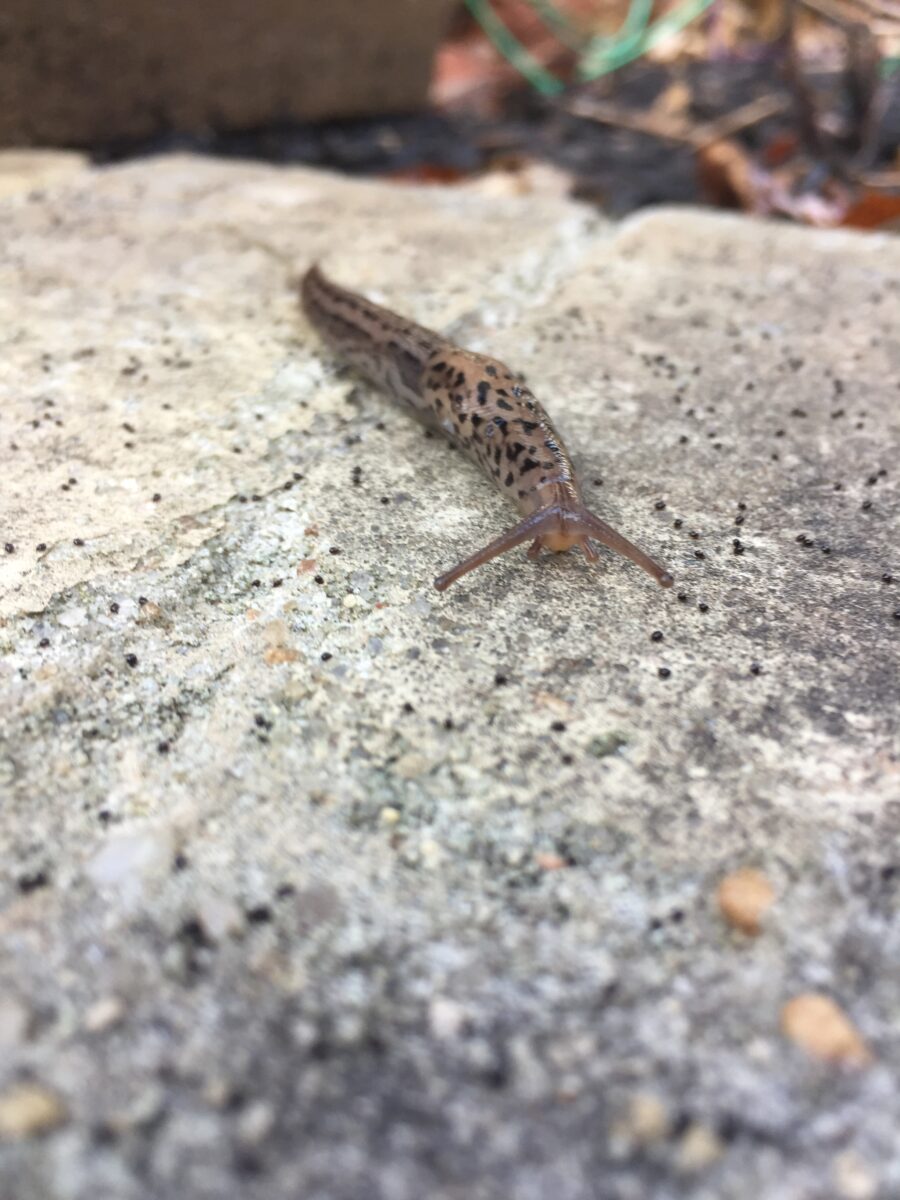 This week’s blog was written by Maddy C., a Ursids alumni. She loves learning about animals. Maddy thinks that the variations among species are fascinating and she likes researching animals that may not be appealing to other people. She is looking to major in animal sciences in college and become an animal behaviorist.

Though the idea of slugs may seem “gross” to some, the spotted leopard slug is a good example of how unique and interesting they are. Living in southwestern Pennsylvania, I see spotted leopard slugs very frequently. I always try to relocate them into a grass muddy area rather than on pavement, but it can be difficult work.

One morning I observed over a dozen of these slugs on the walkway and garden mulch next to my house. Seeing these creatures so often, I came to wonder: what really are these slimy organisms? Despite having a multitude of names, “the spotted leopard slug” is based on the leopard-like spots on their mantle (the lump on their upper back) and long strips down their back to the tip of their “tail”. According to my research, spotted leopard slugs are an invasive species originating in Europe that typically live in damp locations under rocks, logs, leaves, or a variety of other items. They must stay wet in order to produce their sticky mucus which is vital for their survival because it allows them to move more easily and helps them eat. Speaking of which, spotted leopard slugs are known to eat fungus, decaying plants, carrion, and even other slugs, both from their own species and from other species. Because of this, they can actually be somewhat helpful for one’s garden because they decrease populations of more detrimental slug species.

The most interesting thing about spotted leopard slugs, however, is their reproductive methods. Spotted leopard slugs are hermaphroditic meaning they have both “male” and “female” reproductive organs. Although they do not self fertilize, as this would decrease genetic variability among the species, this trait is extremely helpful because it allows them to mate with any other member of their species. Instead of spending their time and energy searching for a mate of the opposite gender, finding any other spotted leopard slug will do. Once two slugs are ready to reproduce, they begin a unique mating ritual. First, they move to higher ground, like a stick or outcropping, one slug following closely behind the other. Then, together they descend by creating a mucus-based “rope” allowing them to have an open, vertical position. I won’t get into detail about the next part, but once they are done mating, one spotted leopard slug will climb back up the mucus “rope”, partially eating it in the process. The other slug will drop down to the ground, and they part ways. The slugs eventually lay clusters between 50 and 130 clear eggs that become milky white as the babies develop. When they are ready, the tiny baby spotted leopard slugs will emerge from their eggs and go their separate ways. Spotted leopard slugs are generally solitary animals in the wild, but have been observed to form close relationships in captivity.

← January Student of the Month – Shane P.
Salamanders – Where to Spot Them and How to Protect Them →