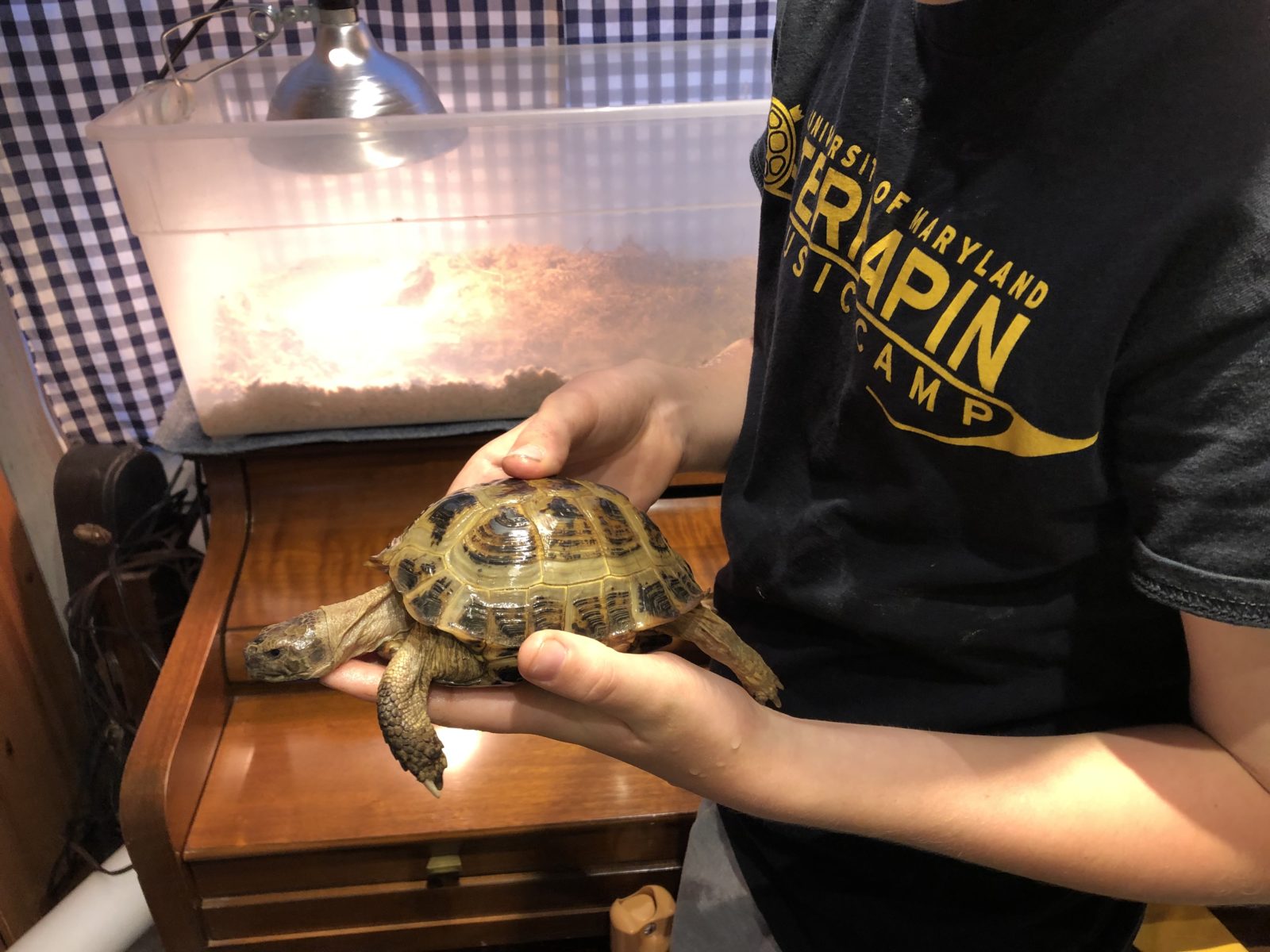 While hiking on the banks of Patapsco River on a cold early March day this year, I did not expect to spot much wildlife, especially not a coldblooded animal. When something was trying to crawl through the thick underbrush, I just couldn’t believe my eyes. It was a large turtle. My first guess was a box turtle. When I got closer, it became clear that I was wrong.  After further examination, I also ruled out the endangered wood turtle. It took me quite a while to realize that this was not any of nineteen native Maryland species. It took me even longer to accept that this battered guy was not native to North America. When I confirmed its identity as Afghan tortoise, also known as Horsfield’s tortoise (named in honor of the American naturalist Thomas Horsfield), and its vulnerable conservation status, I decided to rescue it. Six months later, after treatment with vitamin D/calcium supplement and living in a properly set up terrarium with UV lights, the tortoise is on the way to recover from metabolic bone disease and overall is in much better shape than when I found it.

Of course, I enjoy keeping this new interesting pet, still, I wonder how the tortoise from Central Asia ended up struggling in the woods on the East Coast of the US. The turtle has obviously mistreated by its prior keeper and probably released before winter. Unfortunately, it is common, that pet owners realize that they are not able or willing to continue to take care of their pets and they just release them into the wild.

The Afghan tortoise was not the first exotic species I encountered in the wild. Also, I was shocked to find a large school of goldfish in local streams already multiple times. It is a very dangerous practice to set the pets free for both the pets and the ecosystems. The released pets might suffer and not be able to survive in the wild or even worst. They can outcompete the native species, displace, or kill them. They can pass on diseases to native species. If exotic pets set up a breeding population they can become invasive and lead to the extinction of native plants and animals, destroy biodiversity and alter habitats permanently.

There are also health and economic reasons why not to release pets. So, how to avoid it? First, before purchasing a pet, it is necessary to research the animal as much as possible and to consider the options even for the future, since some pets can grow a lot. If it is not possible to keep a pet, the best procedure is to contact the local rescue, who may be able to help. In conclusion, to release a pet into the wild is very cruel and can have very severe consequences.