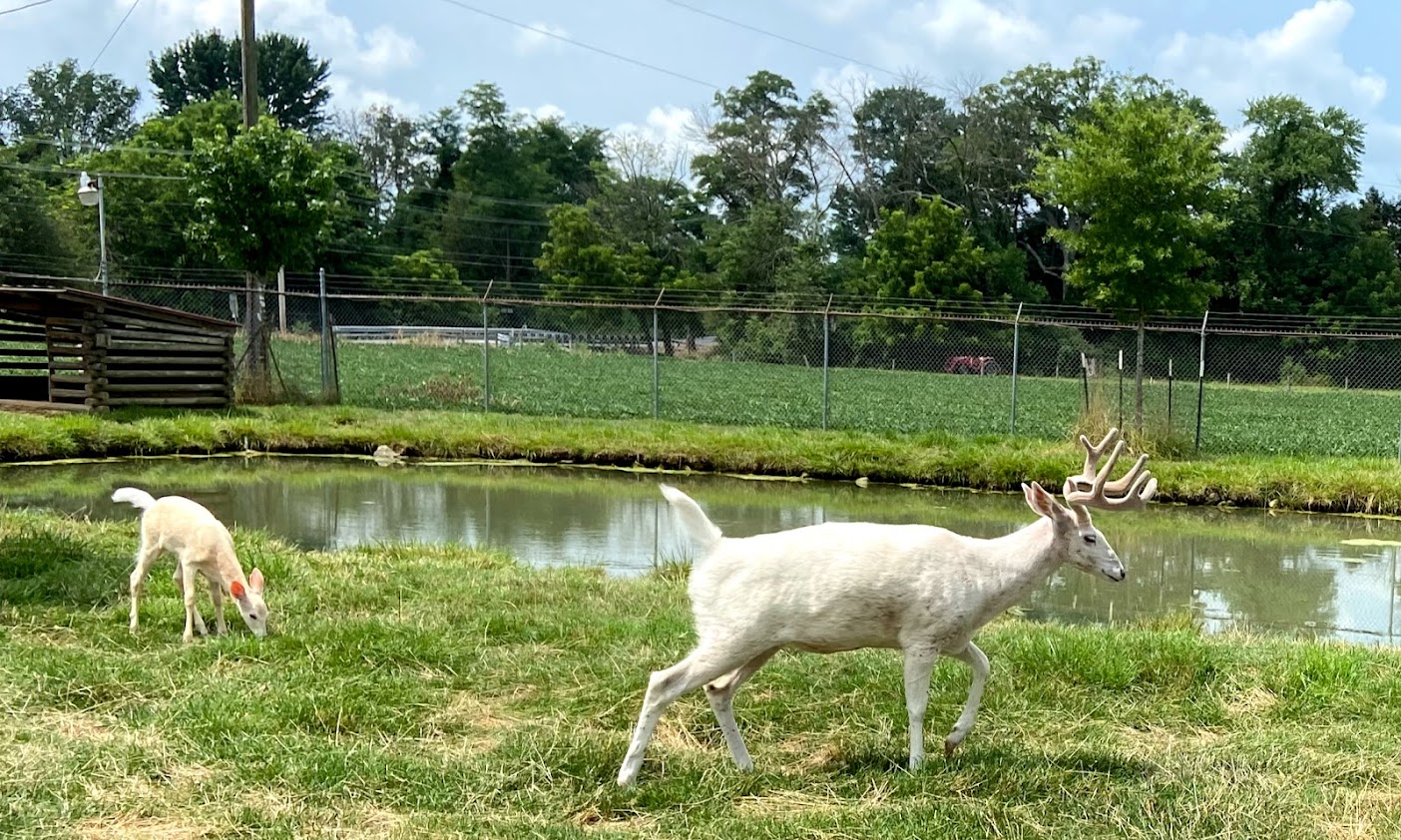 One of my favorite restaurants in the whole world is a local 50’s inspired ice cream and soda shop near my home. Without any available inside seating, but rather a nice complex of picnic tables outside, the abounding nature around me spells such fun. With swing sets, plenty of trees and grass, a stream running down the middle, and the ultimate cherry on top–the deer pen–it is always a special summer day to make a venture there.

Following an unexpected closure of the shop, I recently had the chance to visit once more and find that after a long time away, the ever-treasured deer pen particularly caught my eye. Inside, I found two completely white deer! My first thought upon seeing the deer was that they must be albinos (a common mistake). Upon further inspection, I realized that the deer had both black noses and eyes, which showed they must have some pigment. This piqued my interest, and I began discovering. The deer were in fact not albinos, but rather exhibited a condition called leucism. Leucism is a recessive genetic trait that impacts the amount of melanin pigment in an organism. Some animals impacted by leucism lack pigment all over their bodies, and are thus almost entirely white; whereas others only have white splotches, or are half white (and half brown in terms of deer). Deer with these mixed colors are often referred to as piebald deer.

In comparison, albinism is a congenital condition that results in a complete absence of melanin pigment. Albino deer also exist, but they have distinctive pink eyes and noses. The deer in the pen had black eyes and nose, maintaining melanin in these places. And therein lies the key to identification of albinism vs leucism — namely, if you are trying to decide if a deer is an albino or exhibits leucism, the eyes are probably the best place to look.

Leucism can be found across many species. In the United States, birders often encounter unusual white birds that do not match field guides, and white squirrels have proved to be a popular tourist attraction. Elsewhere, white tigers and white antelopes are a result of this genetic trait. Leucistic animals will typically have an easier time surviving than albino animals, and thus are more common. Unlike albinos, they do not have reduced or poor eyesight, a common ailment of albino animals. However, like albinos, their distinct appearance makes them so beloved by many humans but does not provide the best camouflage in the wild, making them more susceptible to predators.

It is a rare occurrence to see a leucistic deer–even rarer to see an albino–which may explain why the only time I have seen one was in captivity and not in the wild. Due to the rarity of these deer, they came to be considered sacred, and myths popped up surrounding them. One such myth details a curse set upon any hunter who shoots a white deer. The unfortunate hunter will supposedly experience a string of bad luck following the killing, and have trouble bringing down any other deer. This sort of attitude continues to this day, with some hunters referring to these deer as “ghost deer”. Those lucky enough to catch sight of these rare phenomena of nature are commonly struck by their appearance. Even more, many go so far as to try and preserve this rarity, continuing its legacy of fascination and mystique. Leucistic deer are just another example of the great diversity of life found on our planet. Who knew there were not one, but two different kinds of uniquely colored, white deer? Good luck to our snowy friends! You are truly beating the odds!

← The Motherly Wolf Spider
Fun Day on the Water →