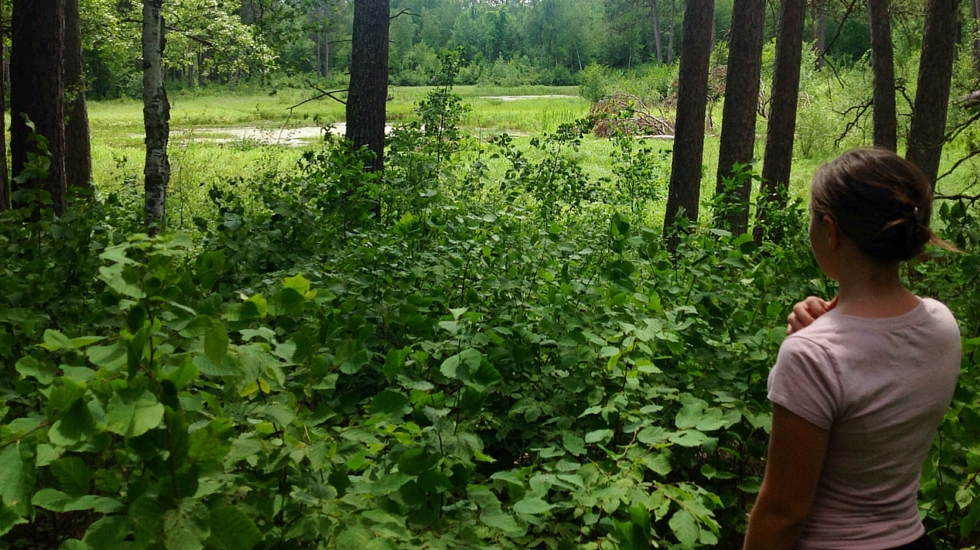 The Life of a Minnesota Lake

This post comes to us from Freya, a Bucktails and Ursids alumni, and one of our Youth Blog Correspondents.  She writes about the formation of the many lakes of Minnesota, which give the state its nickname, “the Lake State,” and the interesting (and hungry) creatures she met during her trip there.  Freya also shares more of her stunning original artwork!

Minnesota is known as the lake state, and “10,000 lakes” is proudly stated on the Minnesota license plate. The name ‘Minnesota’ comes from the Dakota word meaning ‘clear blue water’. I thought ten thousand was a lot of lakes for one state, but there are actually even more. The total is 11,842, and those are just the big ones. To count as a lake, a body of water has to be at least ten acres in size, so there are thousands of perfectly nice ‘ponds’ as well.

So, how did this landscape of lakes form? 12-13,000 years ago most of MN was covered in thick ice sheets. There are a couple different ways that glaciers create lakes. As glaciers move, they scrape up a lot of rock and carry it along with them. When they melt, they dump layers of this debris, called glacial till. Pockets of clean ice in the glaciers leave depressions when the ice melts, creating lakes. Lakes can also form when streams of meltwater run beneath the ice gouging out channels.

With many thousands of lakes and ponds, it’s no surprise that some serious fishing goes on. In fact, Minnesota sells more fishing licenses per capita than any other state. Walleye, pike, bass, trout and long-nose gar are just a few species commonly caught. Swarming in Lake Itasca’s shallows were big shoals of what looked like bull frog tadpoles. They were actually little whiskered catfish babies. Catfish sting by the way – The spines in their fins have venom that causes swelling and increased blood flow when they break the skin. My toe got a little first hand experience.

Humans aren’t the only ones after the fish; there are lots of charismatic birds out fishing on the lakes. The common loon fishes by diving and swimming underwater; they can stay down for up to 15 minutes, but the ones we watched fishing stayed down only a minute or two. The loon is Minnesota’s state bird and all gift-shops are festooned with them: t-shirts, hats, mugs and key-chains. Every evening of our visit, their calls echoed iconically across Lake Itasca. We also got to watch herons and a group of very noisy bald eagles. We tried to sneak up on a heron, but we are not very stealthy in a canoe.

The bugs around these lakes and wetlands were a force to be reckoned with. We dealt mostly with mosquitoes, deer flies and horse flies. The aquatic larvae hang out in the wetlands where they have some protection from fish predation. Even as larvae, deerflies and horseflies are blood-thirsty, living as predators and scavengers. Mosquito larvae, on the other hand, are quiet filter-feeders, serenely hanging from the water surface. Some horseflies spend 2-3 years as larvae, some mosquitoes spend only a couple of weeks, but they all eventually get bored, pupate, and rise with a taste for BLOOD! Nah, that’s just the females; they need a blood meal in order to lay viable eggs.

Each of these lakes, like all good things, eventually must come to an end. Over the years, as hills erode, as leaves fall, as reeds and cattails grow and die, the organic matter and sediments build up and the lakes slowly shrink. Lakes become ponds surrounded by marshes (Uh-oh, Mosquito nurseries! Bet Minnesotans aren’t itching to have more of those around! Sorry, pun-haters.) But hey, while this is inevitable, it’s still a long way off. Right now, people and wildlife can just enjoy ten thousand lakes in all their glory.