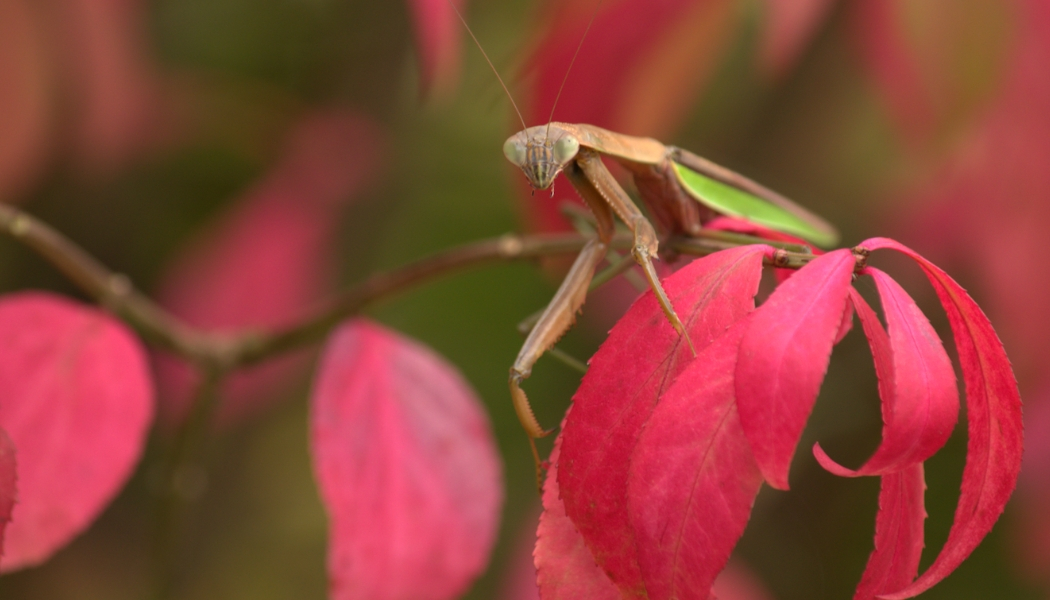 This week’s blog is from Lyssa B., a Gobblers alumni! She describes the interesting anatomy and habits of the praying mantis.

The praying mantis is named for its rather prominent front legs, which are bent and often held together in a manner that resembles that of praying hands. These are the only insects that can rotate their heads 180 degrees, making their five eyes rather handy. Two main compound eyes are positioned on either side of the insect’s head, while the other three are located in a triangle formation behind a pair of antenna. Mantises are typically green or brown, sometimes a mixture of both for camouflage. When catching prey, praying mantises strike with lightning fast precision and accuracy. They eat their prey alive, preferably starting by eating the squirming limbs first. Spines along the mantis’s forearms make it extremely difficult for any kind of prey to escape.

Praying mantises also have many mouthparts, which can be accurately described as a mustache of fingers. As mantises grow, they go after larger and larger prey including hummingbirds and small lizards. Though a ladybug may look at one of our monster movies and say ‘Try living down here with the mantis’, these gentle bug giants are actually quite fun to hold. Though the bite can be painful, it is like a sharp and brief pinch and doesn’t draw blood. Mantises may look like freak shows, but in fact are very cool creatures!

← November Student of the Month – Mackenzie F.
What to Do When You Spot a Spotted Lanternfly →