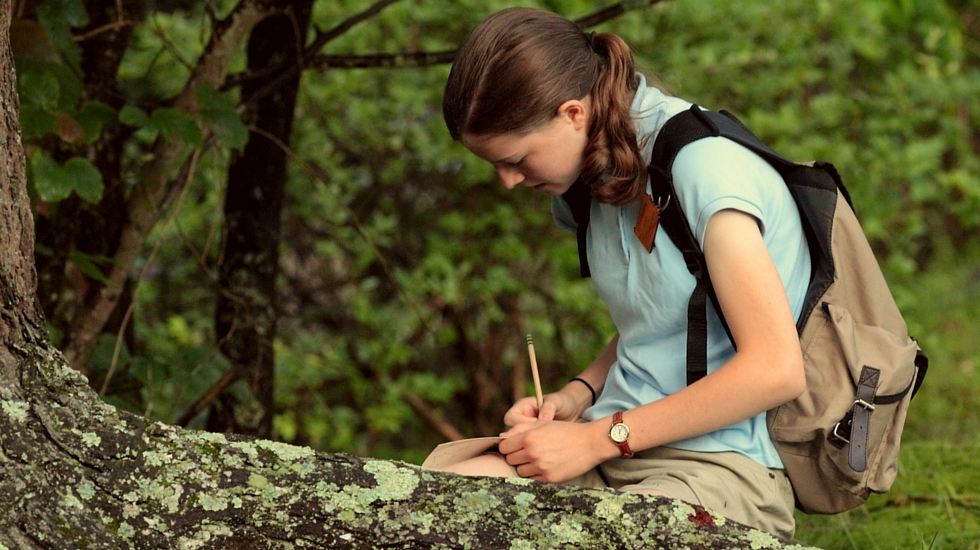 This piece was sent to us by Helen, a 2014 PA Brookie – she writes about her recent vacation to Assateague Island.  During the trip, she and her family had the opportunity to see the famous wild ponies, as well as a variety of other wildlife and beautiful vistas.

It must have been ten years since my family had gone on vacation when my mother decided we should take a trip this past summer. I hadn’t been to the ocean since I was three, and so it was decided that we should head to the coast somewhere—and when I heard the final destination, I was thrilled: we were going to camp at Assateague Island National Seashore, on the long, narrow island off the coast of Virginia and Maryland that is home to the famous Chincoteague ponies. Not to mention, my friend Maria was invited to come too, which made the idea all the more exciting.

It was a seven- or eight-hour road trip down to the island and our campsite, and by the time we arrived we were all more than ready to get out of our Subaru and stretch our legs. The car was absolutely packed—the trunk was so full that in order for my dad to be able to see out the rear window, Maria and I had to unroll our sleeping bags in the backseat and sit on them instead of adding them to the pile in the back. A small mountain of pillows and bags was thrown higgledy-piggledy on the seat between Maria and me, and our poor legs had very little room because of more pillows and bags on the floor. But all the arranging of pillows and bags, and stuffing of the trunk, and suffering of the cramped conditions was quite worth it, for we had no sooner driven across the bridge onto the island than we caught our first glimpse of wild ponies—and were constantly seeing them thereafter.

Our campsite was on the Chesapeake Bay side of the island. We pitched our two tents—one for my mom and dad, and one for Maria and me—between two clumps of bushes; beyond the tents we could see clear across the narrow blue strip of bay to the mainland beyond. Between us and the bay lay a wetlands that seemed to have a flock of noisy white birds constantly in residence. They sounded from a distance like a bunch of old hags, with voices raised in arguing or cackling laughter over some joke. But their appearance was quite at odds with their sound, for they were, for the most part, tall, slender and graceful: pure white with long yellow bills. They were great egrets, and it was the first time I had ever seen such birds in real life.

Indeed, I saw several things for the first time on Assateague. I had certainly never seen the ponies before, and it was absolutely delightful to be at such close quarters to wild horses in their daily life. At night we could hear them all around our tent, tearing up mouthfuls of the coarse grass and munching on it; if we looked out our tent window, we could even see some of them, big black shapes against a backdrop of stars. Much fluctuation took place among the various bands in our general area, at least while we were there—even in the course of one day, we’d see bands increase, and decrease, and mares who had just been in one stallion’s band be added to another band, and stallions who had possessed no mares suddenly become the proud leaders of three or four of them.

But much in nature begged to be seen besides the ponies. The egrets were one example; but in addition to them, Maria and I saw flocks of brown pelicans flying over the beach, and little sandpipers scampering nervously back and forth along the sea strand, as though they’d lost something and were trying to retrieve it. We even believed we saw a bald eagle flying above us at one point, though it soon got too far away to be seen clearly. Someone in our campsite found a baby turtle—it was a tiny little thing, smaller than the bottom of a glass; its Skittle-sized feet were drawn up close to its shell, and its head was drawn as far back as it would go. If we looked under the lip of the shell, we could see its tiny, elfin face, with a pair of big eyes looking rather bewilderingly out at us.

Not all of the wildlife was as delightful as that baby turtle, of course. We very generously played host in the mornings and evenings to mosquitos and black flies; on one occasion, our guests drove Maria and me to jump in the car and close the doors. We also had a few sticky (and painful) experiences with some hostile plants, which lodged in our socks some of the sharpest burrs that I have ever dealt with.

But apart from our guests and the few bits of hostile vegetation, I think all of us loved every minute of Assateague. At one time, the island was going to be made into a resort town; however, a colossal storm produced a flood that destroyed the work that was being done, and after that the island was left to the ponies. Now part of it is a national park, and part of it is a state park; the ponies roam wherever they like, and the habitat is preserved as well as possible.

I am infinitely glad that the island was not made into a resort town. Possibly one of my favorite times on Assateague was after all the crowds were gone, taking with them the noise and the cheerful but artificial colors of towels, beach umbrellas and sand toys. We visited the beach at dusk; the sky was filled with lovely shades of rose and jasper, and I could just barely make out the thin crescent of the new moon. As the color faded to a warm purple, stars began to appear, pricking out one by one, then two by two, and then suddenly all becoming visible as the last rays of the sun faded on the horizon. Maria and I waded in the water, which was still pleasantly warm; it rushed in and sucked the sand from under our feet, and then withdrew and deposited the sand on top so that if we stood still, we kept sinking deeper and deeper into the beach. And when we looked up—above us, in the velvet-black sky, we were able to see for the first time the Milky Way. Out in the wilderness, as it were, away from the glare of the cities, we were able to see the dense band of stars that stretched across the sky, that all the people of the world must have been able to see hundreds of years ago. Looking into the sky on Assateague, one could see the vastness and mystery of the heavens; and looking across the water, one could see the vastness, mystery and power of the sea. The beach and the sky and the ocean felt wonderfully wide and open; standing there was exhilarating, and made one feel as free as the ponies that wandered over the ridge and down along the shore.

I hope the world never runs out of places like that. In the rush and glamour of ordinary life, we often lose track of what true peace and beauty are, and how precious they are. We need places like Assateague to be able to find them again.

Applications are now available for both youth and adult mentors for the 2015 summer field schools including Bucktails, Brookies  Drummers, and Ursids!  Click here to learn more.