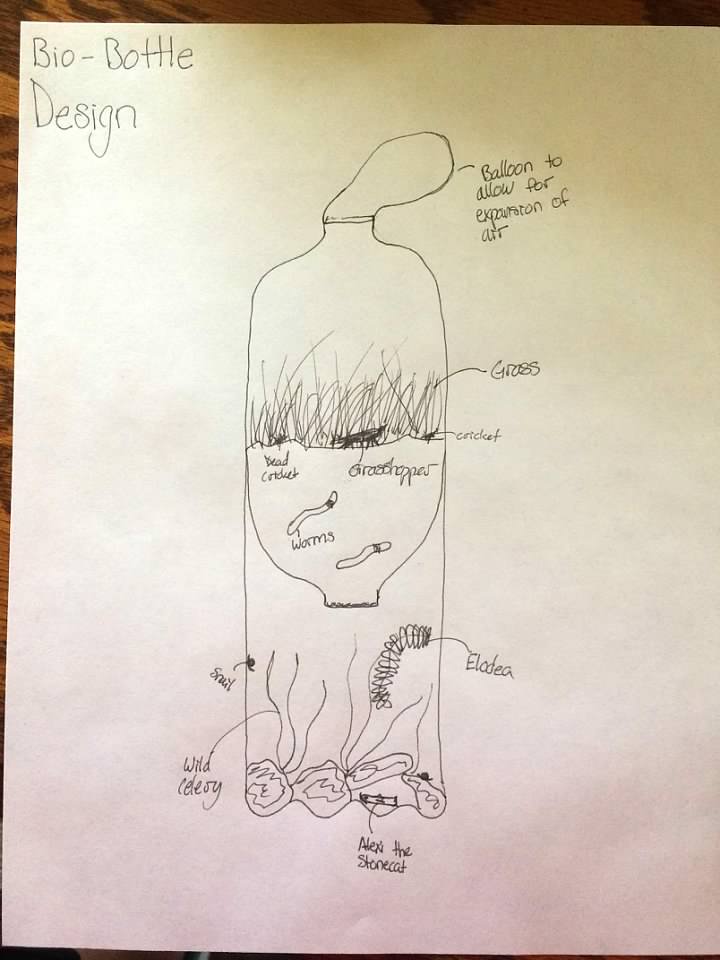 This week’s blog was written by Laura M., a Bass alumni. She writes about what she learned during an experiment in her environmental science class.

Recently in my environmental science class, we did what is known as the bio-bottle lab. In this lab, we had to successfully create an ecosystem in a bottle with two different ecosystems being represented. We needed to have this ecosystem live for two weeks with it completely sealed up. We could not open the bottle if we noticed the organisms dying or for any other reason. We could only observe and watch the events as they played out. What we learned during this experiment was unexpected, and the end results were much different than we expected.

For my group, we had a terrestrial ecosystem on top and a freshwater aquatic system on the bottom. We had intentionally put in soil, grass, worms, grasshoppers, slug eggs, and a cricket. At the end of the experiment, we found that we put a millipede in there too. For the aquatic system, we put in rocks with algae on them, wild celery, elodea, snails, and a stonecat (we named him Alexi). We later found a little fingernail clam. We got the grass, soil, grasshoppers, and millipede from my backyard, and we got the slug eggs from soil near a creek and the cricket from the pet store (we were originally going to put five crickets instead of three grasshoppers and one cricket in the bottle, but the crickets ate each other before being put into the bottle, so we added grasshoppers too). We got all of the aquatic elements from the Susquehanna River. Originally, we thought that our terrestrial system was going to survive better; however, our end results were drastically different than what we anticipated.

Throughout this experiment, we learned just how delicate ecosystems are. Our terrestrial ecosystem would probably have been fine if we had just had it balanced better. We needed to have fewer grasshoppers at the top so they wouldn’t eat everything. If this were to happen in a larger environment, the effects would be even greater. If there is too much of one thing in an ecosystem, the effects can be disastrous.

A similar experiment was done on a larger scale in the construction of Biosphere 2. This was a massive, artificial ecosystem that was done to see if an artificial ecosystem could be created to replace the one we already have (Earth) in case it was completely destroyed. However, this experiment was not a success. It showed that people could not replicate Earth’s natural processes on a large scale for us to survive in case of an emergency. Because of this, people should acknowledge that they need to protect the earth that they already have. If we don’t take care of what we have now, we won’t be able to be here in the future. We need to remember that resources are limited, and when they are gone, they are gone forever.

← February Student of the Month – Kaylyn W.
A Fisherman’s Form of Art →