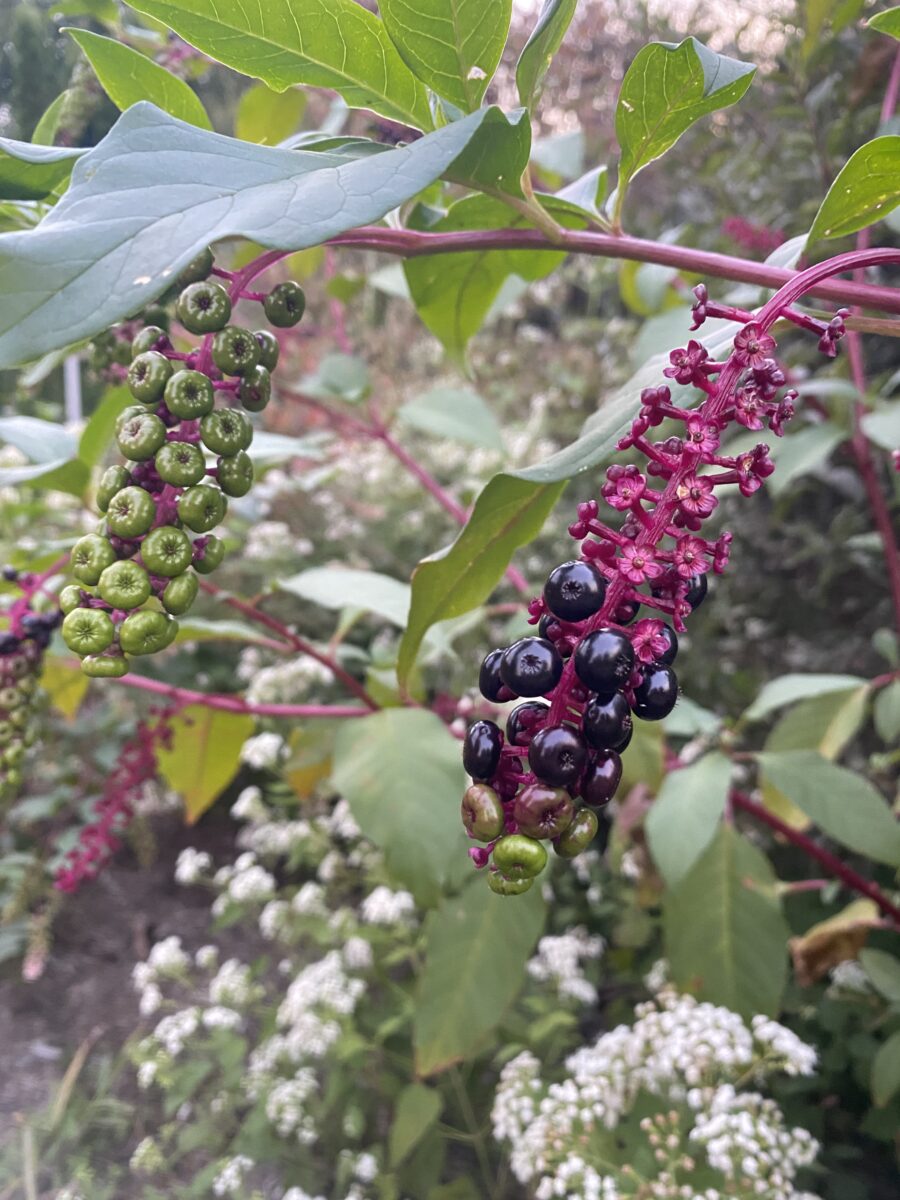 This week’s blog was written by Liam B., a Gobblers and Bass alumni. Liam is a junior in high school who has attended the Wildlife Leadership Academy as both a student and an assistant team leader over the past two summers. He has participated in WLA mainly due to to his interest in wildlife overall, and notably ornithology. He plans to attend college and afterwards pursue a career with the game commission.

During this time of year, many plants can be seen in my mother’s expansive garden. From Popcorn Plants to Flowering Dogwood, to Oregon grapes. But one of them sticks out amongst the others for various reasons. Notably, this supposed invader is seemingly everywhere. Also, its deep purple fruit contrasts heavily with my mother’s warm-colored flower beds. But surprisingly, this supposed “invader” has a surprisingly deep-rooted history in my life, as well as Pennsylvania as a whole.

Phytolacca americana, otherwise known as pokeweed, American pokeweed, and inkberry, is a poisonous plant that is native to the Eastern, Central, and Midwest parts of America. Almost every part of the plant is poisonous to humans and mammals, but the berries are the favorite of various songbirds. The fact that various songbirds eat its berries ties into my life heavily. This is because both myself and my grandfather are avid bird watchers, and as such, it was allowed to grow somewhat freely. This enables me to expand my bird-watching endeavors and as such, despite its rather rampant growth, it is still a welcome sight whenever I see it.

Aside from my personal experiences with this plant, humanity’s view on this “weed” as a whole is rather mixed. It can be viewed as both a pest plant and as an impactful species to both humans and animals alike. As the plant is extremely poisonous, it is a danger to not only humans but livestock as well. As such, when it is found growing in a grazing pasture, it is removed with extreme prejudice. In China and Japan, where it was accidentally introduced, it has naturalized somewhat, but it is still very much an invasive species.

However, in nature, it is a very good food source for not only various species of birds, but a few species of caterpillars also eat it. Humanity has used the plant much more than you would expect. Its early spring shoots and leaves can be cooked and eaten. It is surprisingly nutritious and is rich in vitamin A, vitamin B2, vitamin C, and vitamin K. The berries can be crushed and the extract can be used as a pink dye. During the Civil War, soldiers on both sides used the juice to write letters home. So despite its title as a weed, this purple fruit is surprisingly valuable to both humanity and nature.