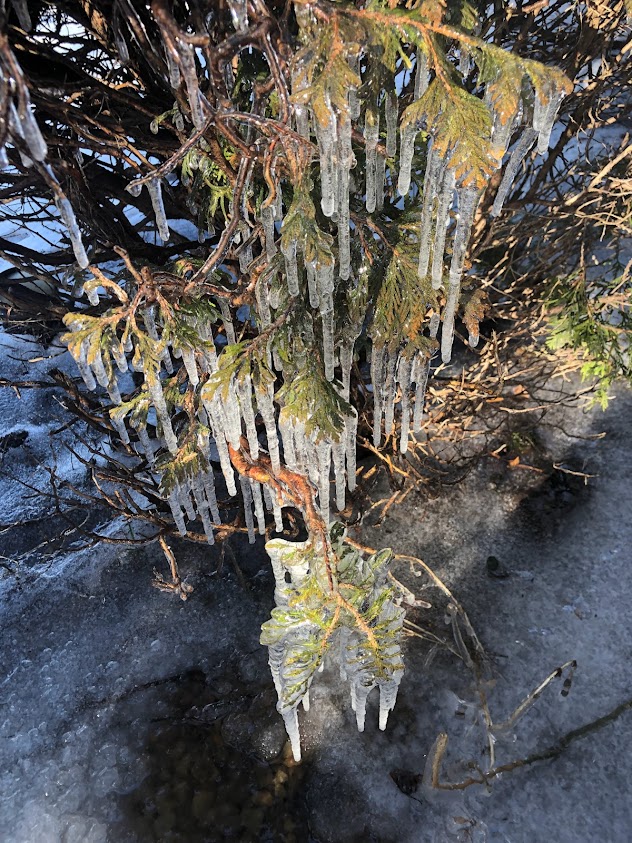 The Shapes of Nature: How Do Icicles Form?

There are many things in our everyday world we often take for granted: the grass is green, the sun comes up each morning, and an apple will eventually land on the ground if you throw it. Science helps us investigate these ordinary but often ultimately extraordinary occurrences, and helps us better understand their origins: chlorophyll and chloroplasts exist, the Earth orbits the sun, and the laws of gravity are very much real. One common feature of the winter I took for granted, at least up until a few days ago, is that of the formation of icicles. I had never much thought of the process before, but after a recent winter storm, questions started to pop into my head. How does water freeze so suddenly in that shape instead of just falling away? And, why are icicles so bumpy?

Icicles need rather specific weather conditions to form. There must be enough sunshine to melt snow or ice, but the air must also be at a temperature below freezing. As the snow (or ice) melts over the side of a roof or other surface, its sudden exposure to the cold air freezes it in its tracks. The entire icicle builds off of this first drop, with each subsequent drop of water freezing as it travels down the forming spike. Due to this fact, while forming, an icicle must continually be coated in a thin layer of liquid. After the icicle reaches a certain size, water droplets begin traveling down its sides to start developing the classic icicle shape.

Another contributor to an icicle’s shape is that of heat. As the liquid water freezes, its heat energy is transferred into the air. This hot air rises, staying congregated around the icicle as it is considerably warmer than the surrounding environment. This air continually removes heat from the liquid water as it travels up the icicle, gaining more and more steam and thus freezing more and more water on its traverse. This delicate process allows the icicle to grow continually thicker towards its top, producing the typical icicle shape.

Now for the peculiar bumps that form along icicles. Why do they freeze like that? These ripples and their patterns seem to be caused by the content of the water itself. “Impurities” in the water such as various chemicals or other substances (salt or dissolved ions of sodium, calcium, or magnesium), can cause this shape. These impurities affect the temperature at which the liquid water freezes, causing irregular freezing patterns depending on what is found in a drop of water. This effect makes the icicle freeze erratically, turning its would-be smooth surface into one of playful curves.

Who knew that the formation of something as simple as an icicle could have such a complicated process with so many different factors at play? This exploration opened my eyes to a field of science I had never even heard of before! Geomorphology, at its basic level, is the study of why natural objects or structures are shaped the way that they are. Scientists in this field often study large landforms such as volcanoes and mountains, or large processes like soil erosion. The research of geomorphologists is often used in hazard assessments to predict how events such as landslides could affect an area. In terms of ice, geomorphology can help engineers who deal with ice formation on bridges or power-line transformers. Surprisingly, even smaller investigations into the shape of an icicle can fall into this field. If the reason behind the formation of something this small necessitates this much inquiry and investigation, who knows what more complex processes these scientists will discover next. Good luck to you all, and good luck to all of us on our daily quests for discovery!

← Why Every Snow Flake is One of a Kind
Heating Snow →